Looking for an open operating system at Mobile World Congress 2015

Mobile World Congress (MWC), the biggest event in the mobile industry, took place the first week of March in Barcelona, Spain, with 90,000 attendees from 200 countries. The site spanned eight large conference halls, which felt like walking from one airport terminal to another, where a brisk walk from Hall 1 to Hall 8.1 lasted 25 minutes. Although Fairphone did not have an official booth, a small team of us attended to meet partners with like-minded goals.

This was our third visit to the annual event, beginning with our “Hunt for Fairphone’s OS” in 2013, and last year we brought along the Fairphone community spirit and our product design team member presented his product trend report.

This year, the main goal of our visit was to find partners that aligned with our core goal of transparency and openness when it comes to software. In this blog, I’ll update you on the major players in the open source software landscape.

Before I left for Barcelona, I asked our community for the questions and concerns they had in preparation for MWC. The community’s questions revolved around:

I can tell you right off the bat that MWC is very much a technology-focused event. In its current form, it is not a venue to discuss social responsibility, e-waste, or how workers are being treated in the supply chain.

To put it crudely, it’s about the advent of 5G, robots, connected “Internet of Things” toothbrushes, and of course, the thinnest, fastest products.

For instance, while Intel is making headway to produce conflict-free microprocessors and working towards making all Intel products in their supply chain conflict-free by 2016, I could not find these achievements on display at their booth.

That being said, on the software side there are alternatives emerging to the dominant operating systems, with Canonical’s Ubuntu, Jolla’s Sailfish OS, and Mozilla’s Firefox OS most visible at the conference.

Leading the pack of hardware companies challenging the status quo are Blackphone (security), Puzzlephone (modularity and reducing e-waste), and Yezz, a producer of Project Ara components who focus on modularity and customization.

I was joined at the conference by Daria from our communications team, who shared our upcoming plans with The Next Web and Heise; as well as members of the product team: our CTO, Olivier, and our lead software developer, Kees.

We were on the lookout for opportunities to join with open source operating systems on the Fairphone. We were interested in learning about each operating system’s set of services, developer support, and business models, to see if they would fit within the framework of our own software ambitions for the first Fairphone and our next device in 2015.

While a company may share our mission, we need a software partner who can also do some heavy lifting in software development and support. This is because we’re a small startup with limited support resources of our own.

Mozilla is a free software community that uses free software and open standards. Firefox OS was launched just two years ago by Mozilla, the organization which may be most known for its open source Firefox web browser. They currently deliver the OS to around 15 devices worldwide. At MWC, I got my hands on the very pretty Fx0 phone currently available in Japan. 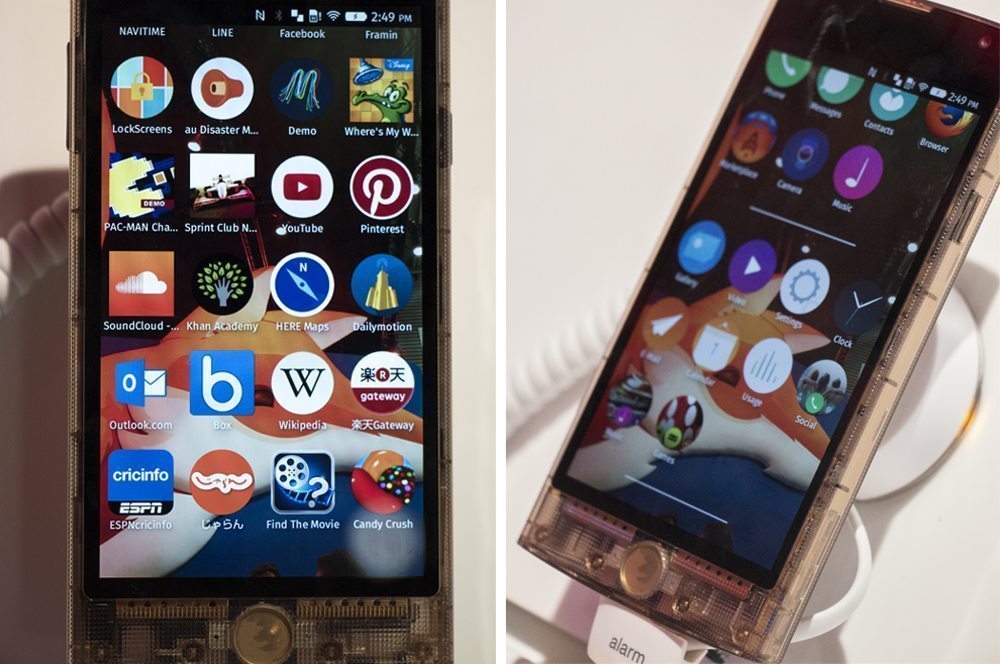 A Firefox OS phone typically costs less than $100 USD, with a milestone last year of announcing a device for $22.50. They are geared to markets with first-time smartphone users. With this in mind, it seems that the Firefox OS model is focused on a lower-end device market, usually in developing countries. Firefox OS is also expanding to other devices, likes TVs. Find out more about Firefox’s plans here.

Therefore, while it seems there’s a match in values and communities between Firefox and Fairphone, there is currently no news to announce about a collaboration. We welcome Firefox developers to come forward and help port Firefox OS to the Fairphone. 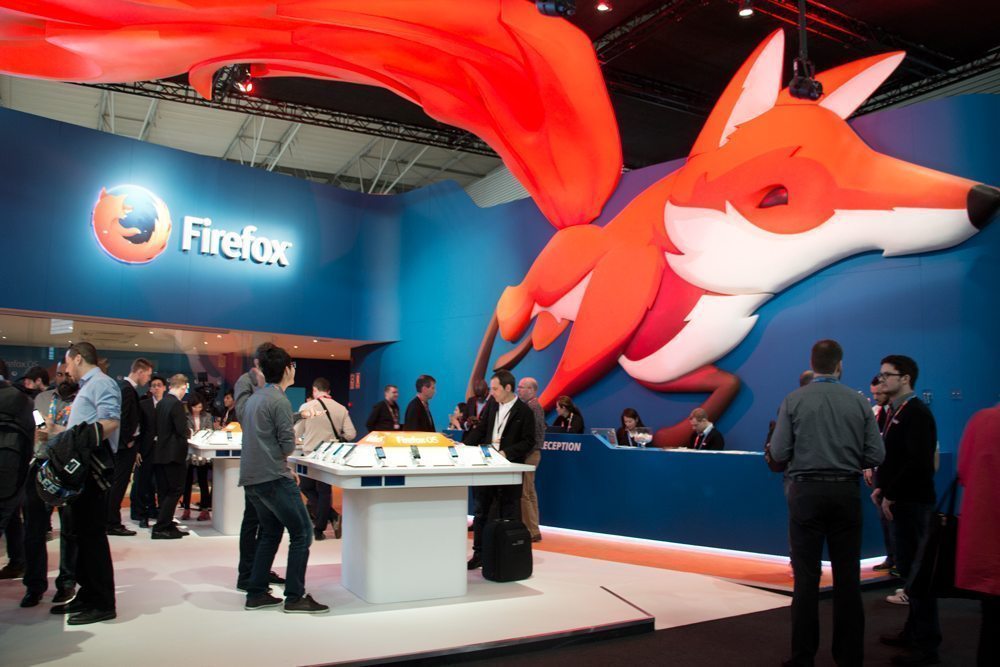 Ubuntu may be familiar to many of you because of their Ubuntu OS for PC. Canonical works on projects with a free/open-source software (FOSS) approach and they have a very committed developer community who use channels like Ubuntu on Air. 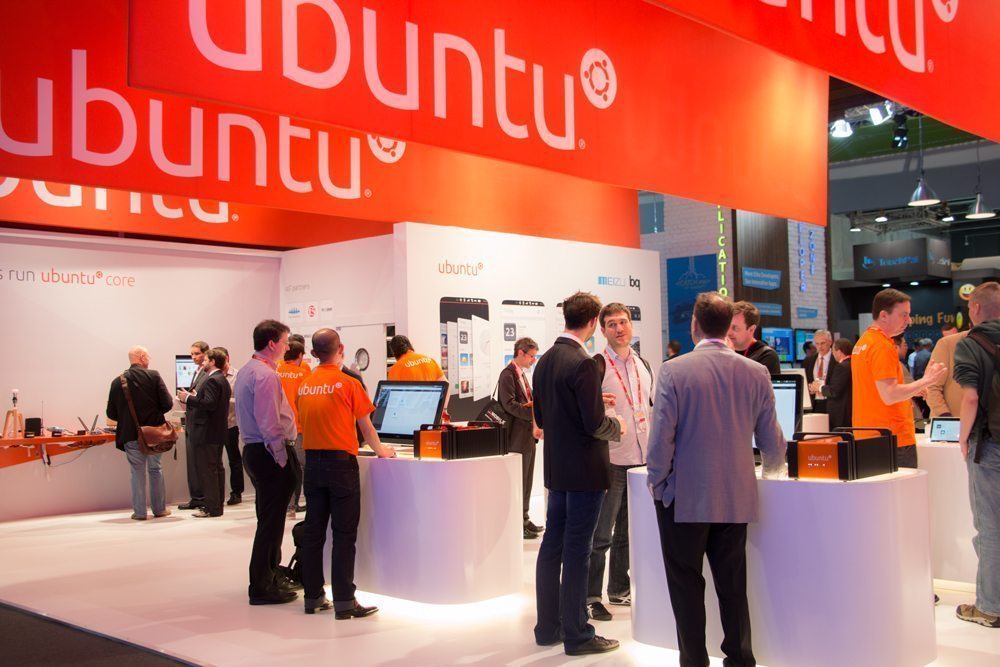 Ubuntu OS for mobiles (aka Ubuntu Touch) launched in early 2013, and their first Ubuntu “out of the box” device is currently available within Europe. The operating system and its ecosystem is created in some part by their community of developers, which in turn adhere to open-source software principles.

Our Fairphone forum community has been buzzing with discussion on Ubuntu for Fairphone, and I want to introduce you to their OS that is shipping now on two devices. Both were on display at MWC.

Canonical has applied their skills from the Ubuntu desktop to the mobile platform. The side dock familiar to desktop users can also be seen on the mobile version.

In a mobile market that is heavily reliant on apps, a new operating system must compete with their own apps or come up with an alternative ecosystem entirely. In this respect, Canonical has chosen the path to create their own widget experience, which they call Scopes. 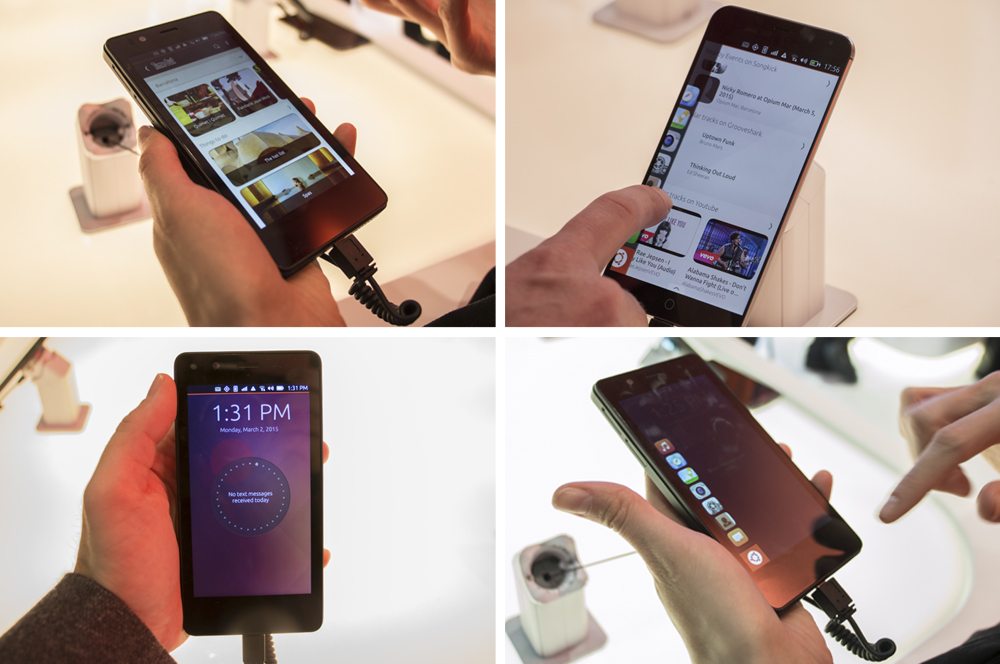 Scopes are segmented feeds of content – from Music, What’s Nearby, Weather or other feeds. This can be chosen by the user, or feeds can be adapted for companies to tailor relevant content to users.

In terms of user experience, Ubuntu Touch works on a gesture-based approach to navigation rather than working with buttons. For instance, swiping from the left gives you a dashboard of apps and the Ubuntu Home; swiping from the right gives an overview of open apps. I enjoyed playing around with it, but I could imagine for first-time users this navigation could take some getting used to.

Canonical seems to be very supportive of developers and software updates, as you can see on their developer channel Ubuntu on Air. There are already questions about Ubuntu being ported to the Fairphone (at the 33.00 mark).

Jolla develops mobile devices and their own operating system, Sailfish OS, with headquarters in Helsinki, Finland.

They were presenting a follow-up to their 2013 phone, a tablet featuring their homegrown software Sailfish OS v2.0. This tablet is being referred to as the “first crowdsourced tablet in history,” and since it launched last fall, it has almost 20,000 backers in its Indiegogo campaign. 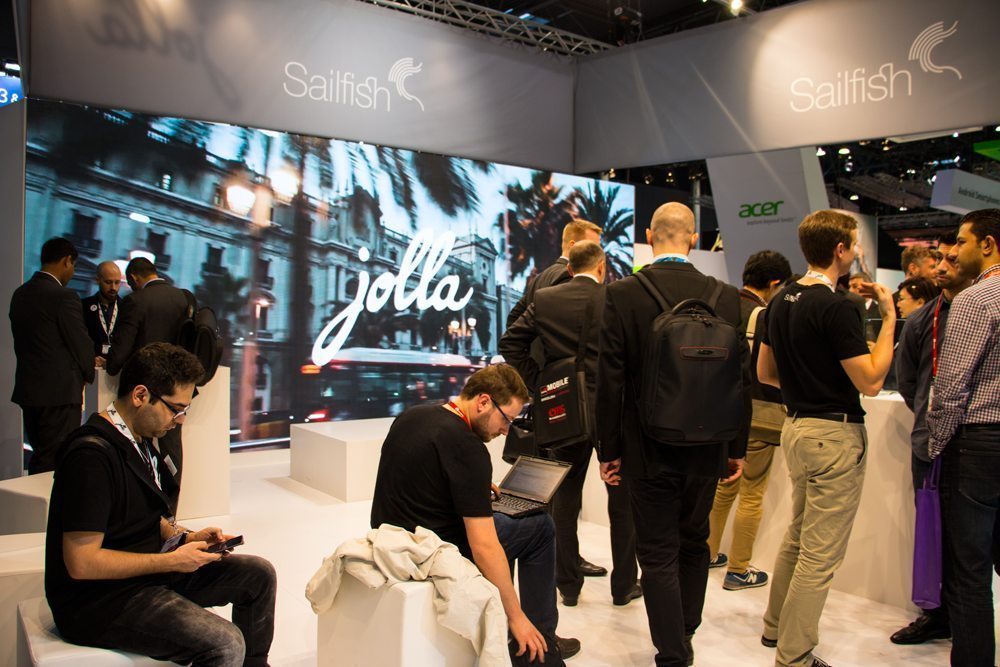 Since Sailfish OS v1.0 was launched with the first phone, Sailfish 2.0 has improved its gesture-based interface. For one, it has become less complex by removing the number of gestures required to navigate, which could help for users adapting to a new OS. Jolla also aims to provide monthly software updates to Sailfish OS users, as well as the ability to use Android apps – as Sailfish OS is one of the few alternatives to Android OS that still incorporates Android apps into their OS.

If you are concerned about security on your phone, Jolla has announced a partnership with SSH Communications Security to create a “Sailfish Secure” version of their OS, a secure mobile platform. Jolla informed me that although there are no specifics to discuss yet, they are aiming to have first solutions out during 2016, which also depends on the potential end-customers.

One issue raised by our community is how open Sailfish OS really is. While it is built on an open source core, it still remains somewhat proprietary, which may be a concern for some community members.

Jolla estimates that their Sailfish OS code is roughly 80% open source. Some apps like the browser are already completely open, but other parts of the user interface are still closed.

You can see the open parts here.

The good news is that Sailfish 2.0 is ready to license to hardware vendors and OEMs, providing one path for the possibility of porting Jolla to the next Fairphone. 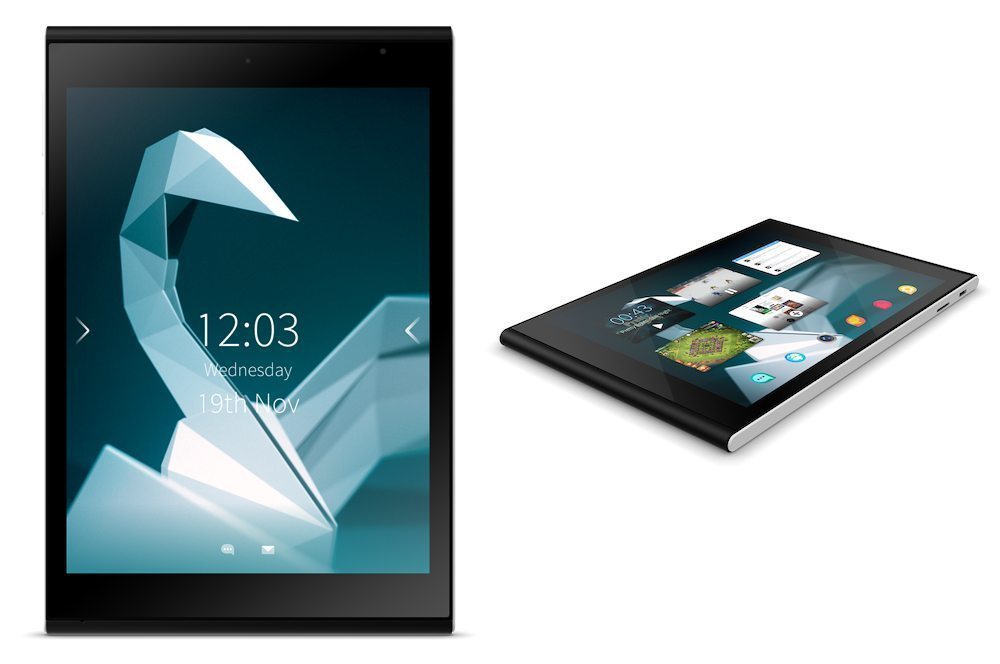 So we will be in contact with them to see what tangible opportunities can come of this relationship.

Finally, I have to mention Jolla’s fantastic community spirit. They have a “people powered” approach to their work, and you can see how that has manifested in their community-initiated projects. Check out some of these projects, including one solar-powered, and one back cover keyboard creation.

What about Cyanogen, Replicant, and other open source software?

Of course, there are even more open operating systems that I do not address here. To name a couple: Cyanogen and Replicant are ones I have seen mentioned quite a few times in community discussion. The reason I am not writing about them here is because they were not exhibiting in a booth at MWC. However, we remain open to software vendors that fit with our mission and can collaborate with us on software development and support.

Community expectations for open software on the next Fairphone

From the comments on social media and our blogs, it’s clear that there is a vocal group in our community who support open source software. From the beginning, Fairphone has wanted to allow users to run open source software – and this is still our intention. But the current reality is that each open source platform has its own timelines and developer resources that need to be taken into account.

Right now, we cannot estimate how long it will take to form partnerships with an open operating system’s developers or their community. But I hope this introduction has shown you the latest offerings from open source software companies, and how they’ve evolved in their development and resources since their initial launch. This progress can only mean good things for our users who want an open platform but also a reliable one, as the software is becoming more experienced and tested. As we get closer to launching the next phone, my colleagues on the product team will update the community on their software plans. Thanks again to those who have posed questions to the forum and I welcome more feedback in the comments section.