To refresh your memory, Closing the Loop partnered with Fairphone early in 2013 to help us carry out a project to reduce electronic waste, particularly in Africa. We’ve started by collecting scrap phones in the surrounding Accra area of Ghana, which includes Agbogbloshie, one of the most toxic e-waste locations in the world.

As I’ve mentioned in my previous blog post, electronic materials are burned, releasing toxic fumes, polluting waterways and endangering the local population. To fight this and provide a safe and legal alternative, Closing the Loop is working with a local partner, Recell Ghana, to collect mobile devices that have reached their ‘end-of-life’ and send them to Belgium where they will be safely recycled.

In January I packed my bag and boarded a plane from Amsterdam to Accra. This time I went to get an update on the current situation, collaborate with new partners and push forward the arduous process of acquiring the permit to ship the collected scrap phones to Belgium. I was accompanied by a film crew sent from VPRO’s Tegenlicht, a Dutch documentary program, who came to cover the story.

As you Fairphone owners know, three euros from every Fairphone purchase goes into funding efforts to reduce e-waste. So as followers and funders of the project, I want to keep you in the loop on the current status, and inform you on the developments that were made during my four-day journey.

I arrived, a little foggy from the long flight, but with lots of energy to get straight to business. I went to our local Ghanaian project partner’s office, where all the collected phones are currently waiting in storage before they get the green light to be shipped to Belgium. The approximately 60,000 collected phones that have been saved from the landfill, weigh over 3,000 kilos in total.

As mentioned in the previous blog, at the beginning of our project some of the collectors had miscalculated the weight of the total amount of phones collected as some of the PCBs had been removed and bags had been filled with brick or clay to increase their profit per bag. To prevent this from happening we’ve had people checking each phone individually since that time.

It was encouraging to see our awareness efforts are starting to pay off.

Our campaign van complete with a speaker on the top is helping to educate the community on safe recycling, our talks in local churches, marketplaces and community groups, and our T-shirts seemed to have created a small buzz around the possibility of recycling rather than burning the materials.

The number of collectors working on the project is also increasing, now with six to eight people working directly for Recell Ghana. In turn, these collectors each have around three to six people working for them. This means that we can move into new regions, with the Ivory Coast as our latest addition.

The day started early, and after a strong cup of coffee I met with both local phone collectors and other interested groups present in the area, to see how we can work together to clean up the e-waste generated by today’s world economy.

So, in a nutshell:

I’m happy with how far we’ve spread the mission of our program. Working in collaboration with these partners means that we can be heard by a wider audience. 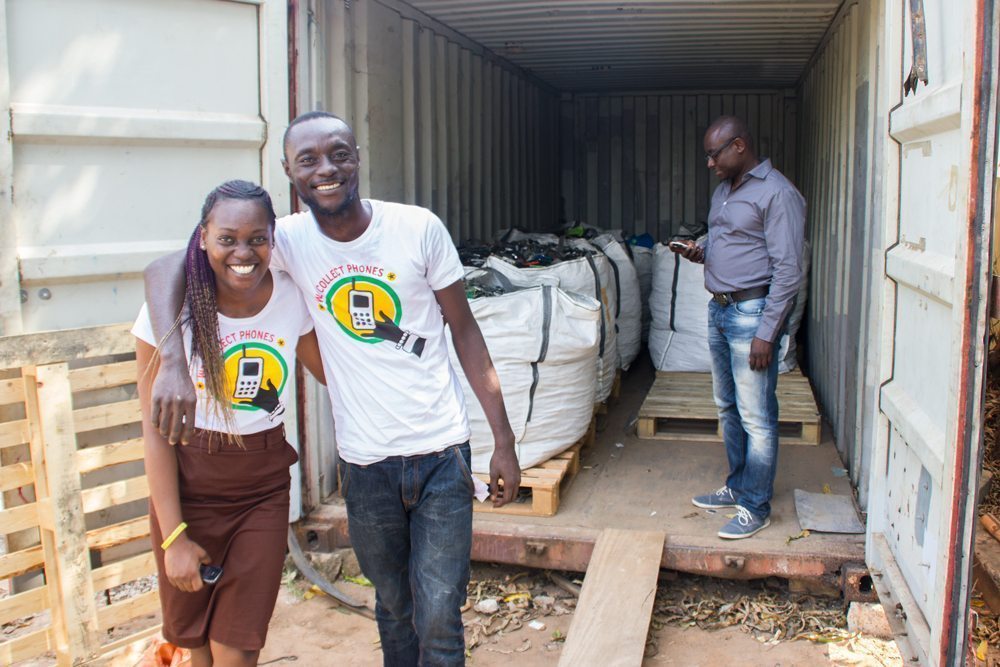 The container of phones that will be shipped to Belgium for recycling.

Day Three – Securing a permit to ship the phones

On Saturday I was ready to take on the one of our biggest challenges – the shipping permit. In order to ship the phones, we need permission from the EPA, both in Ghana and in Belgium. This has been a slow and complicated process. 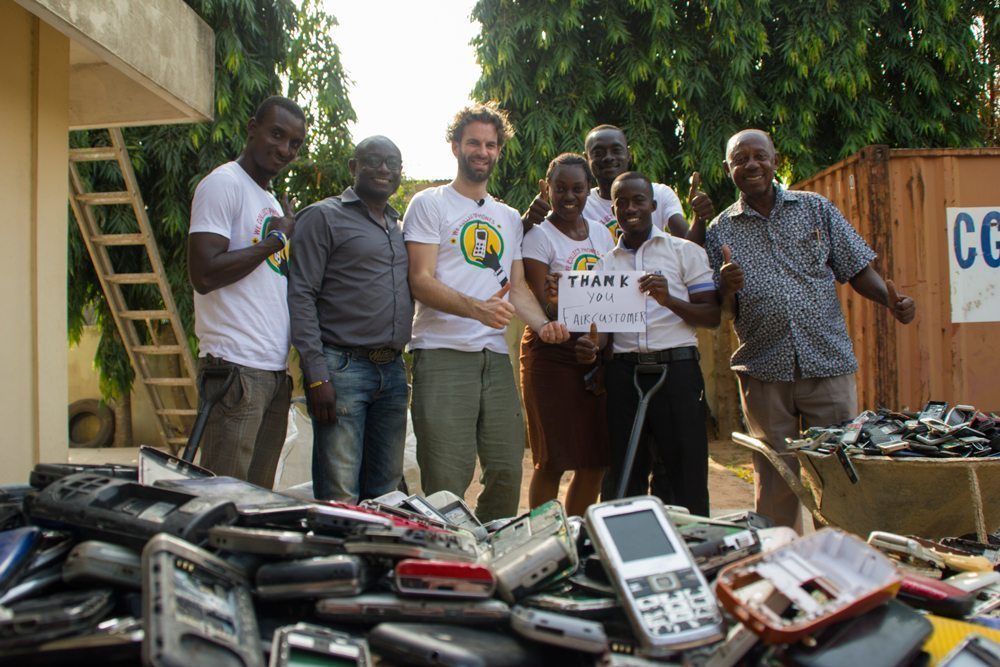 Day Four – The next steps

It may be a day of rest for some, but on Sunday we had too much to do. In the afternoon, we planned, brainstormed and tried to get as much information as possible to decide on our next steps. But first, there was church to attend. And for a hardcore atheist like me, a church mass of four and a half hours (!) is hard work. We visited this church, a gospel church with a lot of singing and dancing to meet the reverend. Recell Ghana promoted our solution to the worshippers. Via churches, we also collect phones and spread the recycling gospel. The income that this generates for churches is used for local social investments. So that’s a win-win-win.

Currently, we’ve put collecting phones on hold until all the paperwork for exporting the phones is completed and approved. Our financial situation is also a bit tight, and although we’re talking to investors, we need the money generated from the recycled phones to be able to buy more phones. And of course, first we want to show that we can ship the phones in a legal and official way, as investors are rightfully keen on minimizing risks.

We’re doing everything in our power to get the permit as soon as possible.

All paperwork is done, paid for and approved, but we still need to get the actual, official permit. As we wait for this news, Maersk, the shipping company, is helping with the details in preparing the shipment, such as the airway bills and getting clearance from customs – which means a lot of paperwork. Once this is ready, we’ll transport the phones to the port of Tema nearby Accra, and then Maersk will ship them to Belgium.
  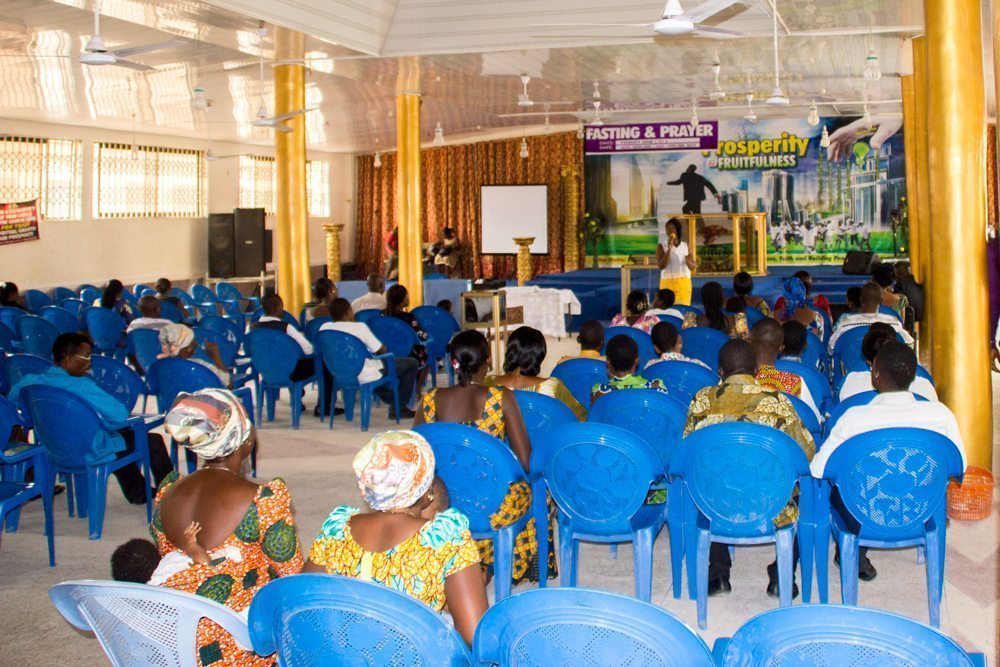 Sunday means church and promoting our phone collection efforts with the local community.

The film crew who joined us on our journey in January are screening the documentary on Dutch television this Sunday, 29 March at 21:05 on NPO 2 (and now available to stream online here). The program is called Tegenlicht (in English literally “Back light”), and it aims to shine a light on often misunderstood or complicated issues in our society.

In addition to the film, Pakhuis de Zwijger in Amsterdam will be holding a Meet Up next Wednesday to discuss the Tegenlicht episode and dive deeper in the possibilities and challenges for urban mining and the global e-waste situation.

A panel, including Fairphone, will hold a Q&A session with each other and you as audience. (And if you’re not in Amsterdam, you can also learn more about how to host your own urban mining workshop. Download the Fairphone Urban Mining Manual.)

I believe Closing the Loop, with the help of our partners like Fairphone and of course Recell Ghana, now has the momentum to bring this approach to the big players in the phone industry. We need to get them on board so we can really scale up the project to create long-lasting positive impact. I am eager to provide more updates over the next months as our work progresses.