At five o’clock in the morning of 24 July, I got on the flight out of Accra, Ghana back to Amsterdam. Being up that early gave me some time to write this update for you all in the Fairphone community about our exciting progress.

So what was I doing in Ghana, and why does it concern you?

I was on the ground in the surrounding area of Accra checking the status of our joint electronic waste recycling project, executed by Recell Ghana with Fairphone and for my organization, Closing the Loop. Fairphone owners may recall that three euros (€3) of each phone purchase are reserved for safe e-waste recycling projects like this one. Closing the Loop’s collaboration with Fairphone began since early 2013, and in early 2014 Recell Ghana began efforts to take up to 75,000 scrap phones from Ghana to one of the largest electronic waste recyclers in Europe.

Now is the time to prepare the scrap phones for shipment to Europe for recycling! In this blog post, I’ll be telling you about the process of collecting these phones and some initial challenges for our ambitious project:

In addition, the project has showed some room for improvement, which I’ll explain in more detail below. But for now I’ll describe the process of collecting the phones in Ghana. What are all the steps that happen before the “Fairphone container” of scrap phones can travel from Ghana to Europe for recycling?

Process of collecting phones in Ghana

Since the beginning of 2014, Recell Ghana has helped Closing the Loop mobilize local collectors in Ghana with the aim to collect 75,000 phones. We now have one field manager (who has a great network and experience in local phone collection), who is in charge of overseeing twelve regional collectors. These collectors also have two to five people working for them, so the network is becoming bigger. 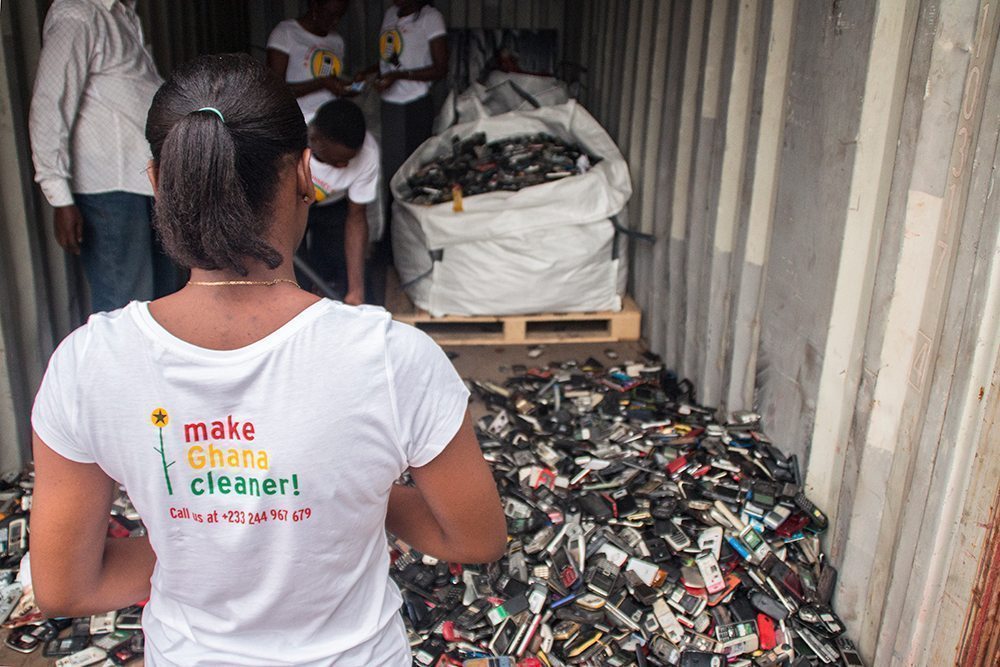 We have a simple and clear message for phone collection that actually works better in African countries than in Europe: We want to buy your completely broken phones so we can recycle them.

Our progress has been a learning one, sometimes by trial and error. For example, we found out that if you pay for old phones by kilo, people will add bricks or even put clay inside the phone (and take the circuit board out). So it makes sense to train people on safety aspects and on the exact collection needs. About five people are directly working for my partner and me, but those people have up to five people collecting for them as well. So the explanation on how to collect has to be complete and smart, but also simple, to avoid any confusion.

Along the way, these collectors spread the message of recycling old phones everywhere they could! It was told in churches, on marketplaces, in schools and via other social networks. And although it has to come with quite some explanation, it is clearly being picked up. In the last eight months, around 75,000 phones were collected across Ghana. With little to no marketing! (Indeed the T-shirts that Fairphone gave our collectors definitely caught a lot of eyes.) Our collectors wear them and it’s really good to see their enthusiasm about the project. 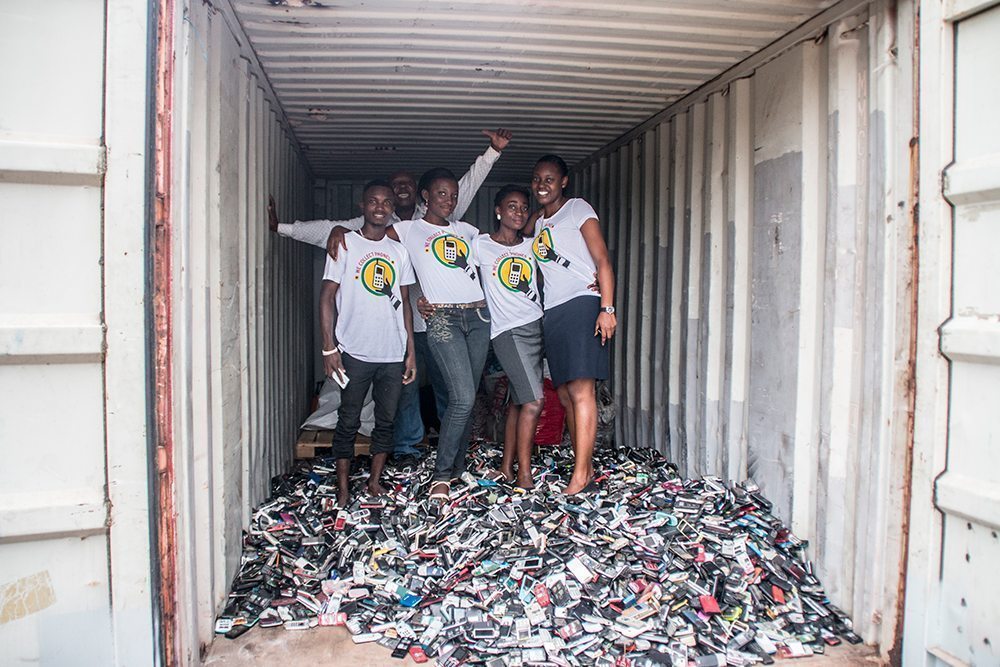 After our partners managed to collect all these phones, they have to be gathered and packaged in the correct manner. Easier said than done. Traditional methods of dealing with products in Ghana at the “end of life” meant dumping waste in landfills, which would lead to greater environmental degradation or cause unhealthy living conditions for those getting metals out of scrap phones in an unregulated process.

Our solution is to find a responsible way to fight e-waste complying with all legal requirements. Currently, we’re on the right track but the administrative hurdles have been challenging.

It is quite a lot of work to comply with all the legal and safety requirements, to understand what exactly has environmentally harmful impact, and to find how and where it can be recycled properly. To reach this goal I also met with a number of organizations while I was in Ghana. For instance, the aforementioned field manager with an existing network of phone collectors, the Ghanaian Environmental Protection Agency, a television station, a used electronics market, and an African focused mobile operator, just to name a few of the various stakeholders I had the pleasure with spreading our mission. 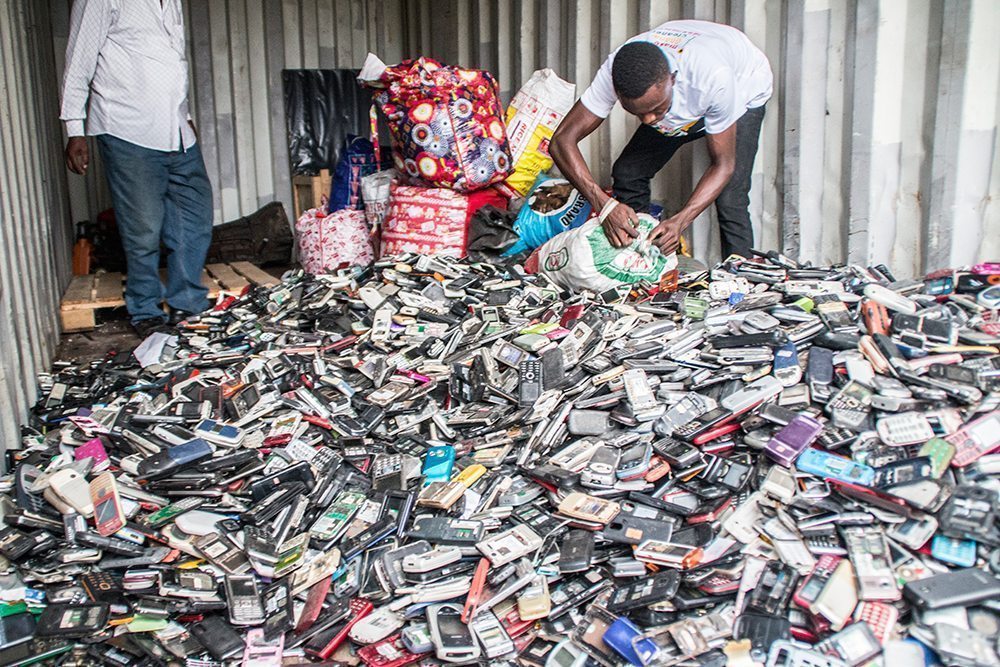 For one specific case: In order to get the permit from the EPA, Closing the Loop and Fairphone have provided them with lots of paperwork containing clear descriptions of the collection projects and the safety and risk measures that are attached to it. In addition, as is custom in Ghana, it requires a lot of friendly conversations with them to get to know each other.

Fairphone acted by supporting the roll out of our practical approach. They also contributed by pre-financing the project. Although recycling creates revenue, it takes many months of work before you can access any such revenue. In addition Fairphone team members assisted in improving the infrastructure for safe collection and storage, as well as encouraging the increase of information and awareness-raising locally. Lastly, they connected other stakeholders to the project, helping to expand scope and include best practices.

Next steps in the project

So what’s next? Well, we are mainly working hard to keep all parties on board and active. But the key thing is to get the – very time-consuming and elusive – permit from the EPA.

We will get this when we’ve shown what we’re doing, that we’re doing it right, and of course after we’ve walked the complete African route of meeting all the right people, and convincing these stakeholders that we’re doing it in the proper, legal way. When that’s done (yes, I believe we will get it, eventually), we can really get down to business.

We are now preparing a marketing campaign to promote the recycling proposition, using radio, our promotion van (speakers on top) and hopefully the support of partners, such as operators. So that’s planned for the next months. In the next weeks, it’s all about making sure that the first “Fairphone container” is ready for shipment.

Oh, and if you like what Closing the Loop is doing, use your clicking power and vote for us at the Accenture Innovation Awards and at crowdfunding platform Seeds. Thanks!