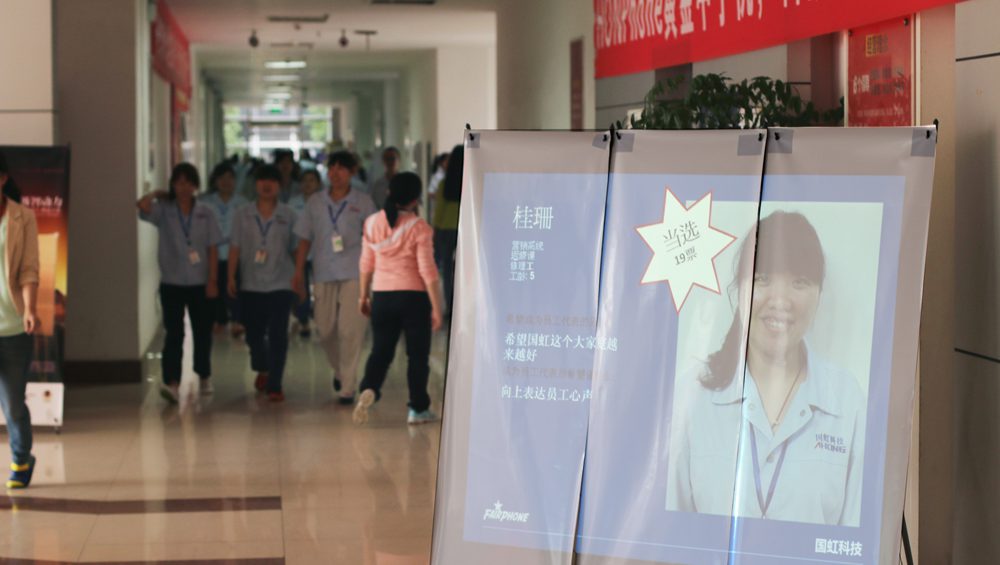 A few weeks ago, I traveled to Chongqing in central China to visit our production partner Guohong where Fairphones are produced. But this trip wasn’t about our upcoming production; instead we were focused on activities related to the Worker Welfare Fund, specifically worker representative elections.

These first elections at the factory were an exciting moment for all of us. Elections were open to all factory workers (except senior management), who selected 18 representatives to put forward worker related interests to management. In the next few weeks, the newly elected worker representatives will collect ideas and help formulate proposals for disbursing the funds generated by the sales of the first Fairphones. They will also select which worker representative will serve as a Worker Welfare Fund board member. After the sales, the Worker Welfare Fund contained 125,000 US dollars and will continue to grow with the sales of our second batch.

This short film provides a snapshot of the Fund’s goals and election process.

Laying the groundwork: The process leading up to elections

Taking place over two days, the elections were the culmination of months of hard work laying the legal, financial and structural framework for a program that was created entirely from scratch. The project came to life with the assistance of a working group made up of a variety of experienced voices from the industry, including unions, NGOs, academics, and more.

We decided to work with Guohong in part because of their willingness to collaborate with Fairphone to improve worker well-being. One potential option was to increase wages for workers making the Fairphone. But when we first negotiated our contract with the factory and after consultation with the Made with Care working group and other stakeholders, we quickly reached the conclusion that simply paying a higher salary to workers on the Fairphone production line was not fair and likely to create worker envy and mistrust and not a long-term, structural solution. As a small player in the industry, our production is staggered and the number of people actually making our phone is a relatively small percentage of the factory’s workforce. This raised questions like who should earn more, how much more and for how long? Providing extra income to only a select group of people could also cause resentment and unequal treatment within the factory.

The group of the 18 worker representatives (and reserve candidates) elected by the workforce at Fairphone’s production partner factory, Guohong.
Instead of increasing wages, we wanted to find a fairer way to address the needs of the factory’s entire workforce that could pave the way for structural change. Therefore, the resulting Worker Welfare Fund structure is designed to benefit all of the workers and office staff (less executives) at the factory while focusing on worker representation and creating channels for workers and management to discuss how the funds will be spent. Our desire, which is included in the statutes, is that the framework goes beyond fund disbursement and also covers areas like working conditions and pay. Our previous Worker Welfare Fund blog post gives more detail about worker representation and the process of funding proposals.

In parallel to determining the basic structure, we began the process of registering the Worker Welfare Fund as a foundation in the Netherlands. This required months of defining legal statutes and internal regulations as well as plenty of other administration. As of July 2014, the fund has been legally incorporated. We have also appointed two of the three board members (Fairphone and Guohong management reps) and the remaining board member position has been filled by one of the elected worker representatives.

Prior to the elections, Fairphone hired an external organization, the Economic Rights Institute, to give factory-wide trainings to prepare all the employees for the next steps. During these workshops, workers were given detailed information about how the fund works and participated in a “practice run” for disbursing the money for worker well-being. An initial sum of 35,000 US dollars was allocated to fund proposals that were suggested during these trainings. During this phase, the overwhelming majority of participants voted to use this amount to fund cash bonuses distributed equally across the entire workforce and fruit options for the free cafeteria meals. 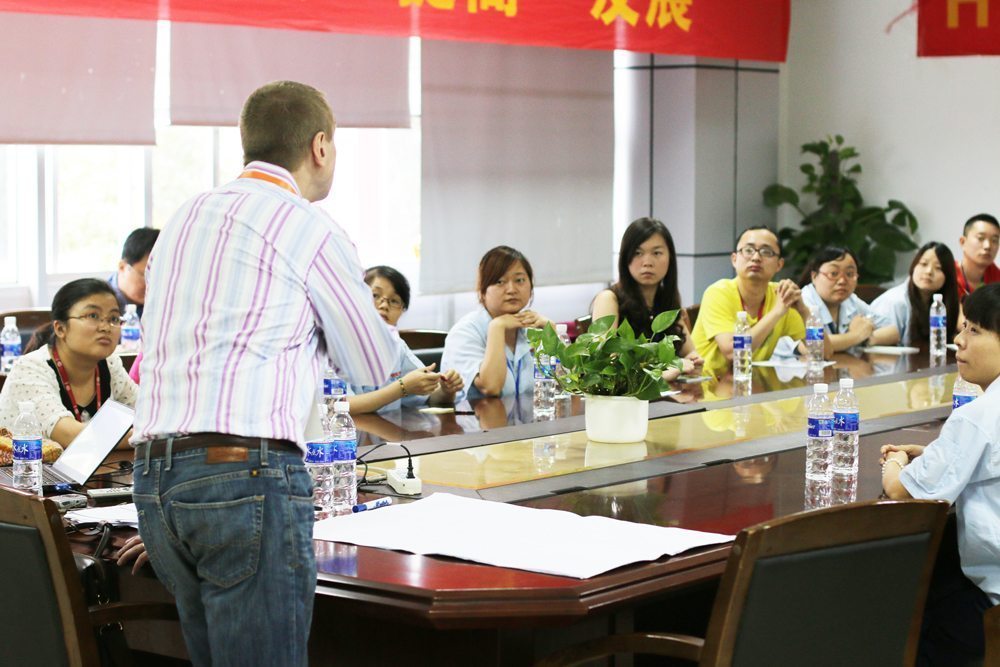 Elected worker representatives take part in a workshop training by external organization, Economic Rights Institute.
To prepare for elections, our production partner’s team sent out additional information and a call for workers to nominate themselves as candidates. The results were good. Within one week, 43 candidates had put themselves forward. Campaign posters with all the candidates were hung up in the factory and the dorms. They also used instant messaging service QQ to share short presentations written by the candidates themselves to explain their aims for improvements. The day before the elections, these presentations were projected in the lobby for all employees to view.

When election day arrived, representatives from the Economic Rights Institute as well as Huang Wei, assistant professor in Employment Relations, School of Labor and Human Resources of China’s Renmin University were present to monitor the voting procedure. Voter turnout was 92% and vote counting yielded clear results which were communicated throughout the factory the following day. In hindsight, we identified a few ways that we could improve the process in the future, including offering the option to write-in candidates on election day and providing clearer ways to campaign prior to the elections. These learning points are valuable and will be arranged for future elections. 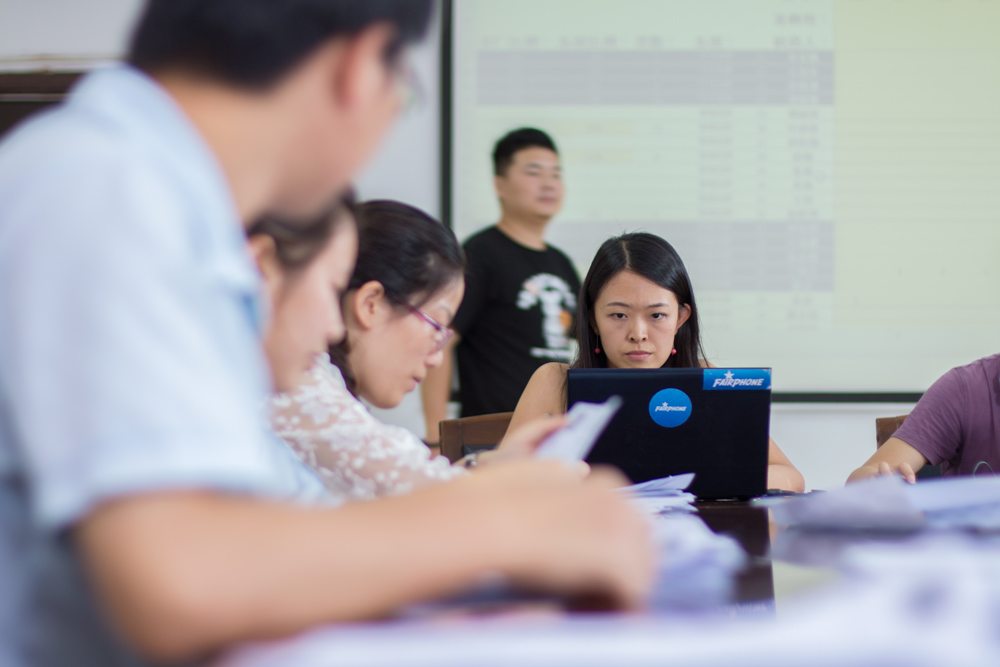 Mulan, Fairphone project manager, assists in the voting process at Guohong’s factory.
The morning after election day, the 18 newly elected worker reps and 10 representatives in reserve, participated in a follow-up workshop focused on skills building and communication and negotiating skills. During this workshop, the representatives decided to delay the decision about which one of them would be a member of the Worker Welfare Fund board until they got to know each other better and gained a clearer understanding of that person’s role and responsibilities. In the afternoon, the elected worker reps and management sat together for the very first time to discuss some of the issues raised at the morning meeting. Management confirmed their commitment and organized a follow-up meeting to discuss further means for improvement.

As I was leaving the factory, I heard from Mulan (our production project manager) that workers were planning to meet in the cafeteria to talk about issues and think of solutions. Overall, there was a very positive atmosphere about the upcoming steps. Although the elections were a major step in formalizing the Fund, we are well aware that the structure is still very delicate and will take ongoing care to mature into a more permanent structure for worker/management dialogue.

Once the funds raised from the sales of the first batch have been disbursed, there will be a new injection of $175,000 from the sale of the second batch of Fairphones.