Editor’s Note: This week we hear from Kyle Wiens, the co-founder and CEO of iFixit, an online repair community internationally renowned for open source repair manuals and product teardowns. Fairphone is happy to announce our partnership with iFixit as Fairphone spare parts and repair guides are now live on our webshop, and on iFixit’s US and EU website.

This is the first step of our collaboration with iFixit – together we’re delivering repair manuals so that the Fairphone community can extend the lifetime of their smartphone. From our current 7 score on iFixit’s repairability scale, we’re aiming for a 10 by collaborating with them on our next model’s design (2015).

Why I don’t want a smartphone. I want a Fairphone.

I admit it. I’m one of millions of Americans sporting a slick, wafer-thin cell phone. I carry it everywhere. I trust it to wake me up at 6:30 am. I rely on it to track my running times. It’s my grocery list, my map, my photo editor—it’s my second self. And, like so many others, I’m rarely (if ever) without it.

But if we all knew a little more about our beloved smart phones—found out where they come from and how they’re made—we might discover an ethical tarnish in our phones’ gleaming surface. Our phones actually aren’t all that smart: they’re harming workers, poisoning critical ecosystems—and challenging the premise that technology makes the world better.

Just last year nearly 2 billion cell phones were sold worldwide. But smartphones, like all electronics, are notoriously complicated to manufacture. Modern smartphones are composed of anywhere from 500 to 1,000 individual component materials—from heavy metals to chemicals. Their supply chains wrap all around the globe. And because they’re so vast, supply chains are also difficult to track. Materials can change hands hundreds of thousands of times—between miners and middlemen, distributors and factories—before they ever make their way into our electronics.

Motherboard Assembly. Step 18. Remove the motherboard from the display assembly.
Manufacturers have pushed so fast for technological advances that they haven’t (yet) fully accounted for the human cost of their products. The overwhelming demand for new gadgets has fueled war, human suffering, and environmental degradation around the globe. In the Eastern Congo, armed groups wage campaigns of violence and rape with money made from the sale of conflict minerals—gold, tantalum, tin, and tungsten mined from dangerous mines, sometimes under conditions that aren’t far from slavery.
 

My company iFixit, the free repair manual for everything—is known for our open source repair information, product teardowns, and growing international community of fixers. We believe that repair can help the planet, save us money, and empower consumers. So it’s a huge part of our mission to understand supply chains. And Fairphone’s supply chain looks radically different from any other electronics company.

This one-year-old Dutch social enterprise—initially a campaign against conflict-minerals in electronics—realized that awareness wasn’t actually solving the cell phone problem. Talk is cheap.

I had a chance to speak with Tessa Wernink, Communications Director at Fairphone. And she explained, “You can campaign all you want and raise as much awareness as you want, but if there isn’t an alternative then what’s the use? We felt that to truly understand the supply chain we needed to start making a phone. It is a process toward fairer products and a fairer supply chain as well as giving people the possibility to buy as a political act.”

Fairphone decided that it was time to put their money where their mouth was. Their million dollar bet: that they could produce an elegant phone that focuses on responsible, transparent design.

Fairphone is at the leading edge of a new wave of companies realizing that there is profit in doing the right thing. Their initial campaign sold 25,000 phones, quickly exhausting their initial production run. And although it’s far cry from Apple’s record of 9 million iPhone 5Ss in a weekend, Fairphone sales are impressive for a startup with no track record. 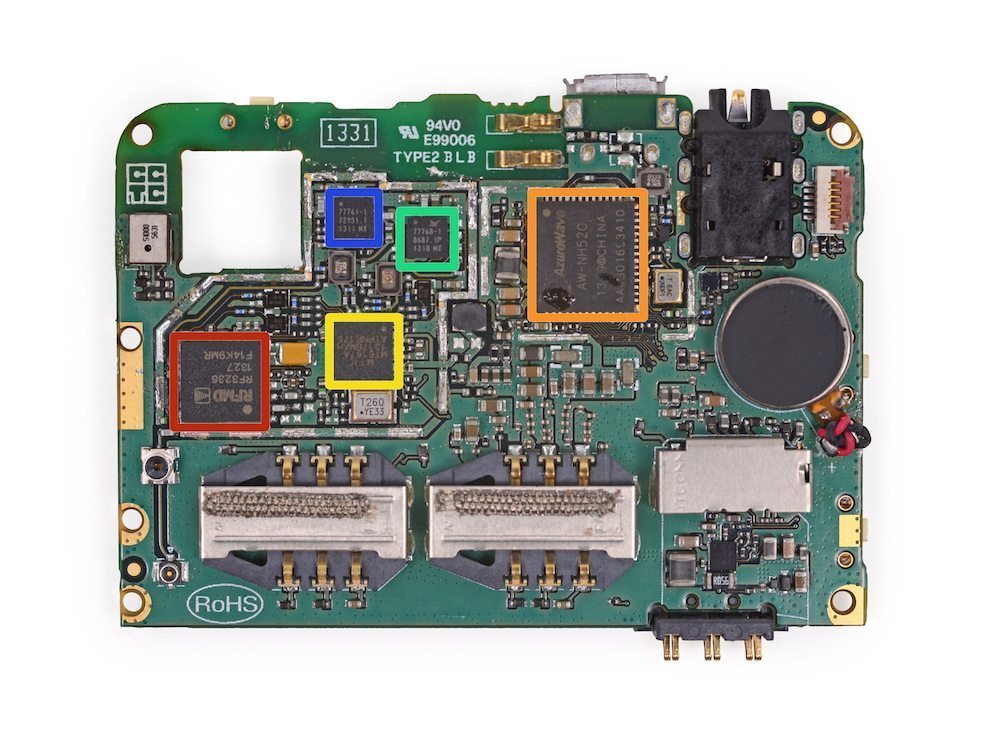 Fairphone Motherboard.
Fairphone is on to something. There seems to be a growing sense of disillusionment with the way technology companies operate. In the summer of 2012, Apple attempted to abandon EPEAT (the leading green electronics label) and was forced to apologize after significant consumer backlash.

But a few months ago, Phonebloks – an idea for a mobile phone made up of detachable modules that can be swapped out and upgraded—took the web by storm. And while small operations like Phonebloks and Fairphone probably won’t ever make a dent in Apple or Samsung’s profits, these green tech renegades are having an impact just by being there.

“Whether or not it’s our company that grows bigger isn’t the point. Fairphone and its community wants to try to influence the industry, and to set an example for systematic change,” says Wernink.

Our Next Step Toward Change

When iFixit handles a device—whether it be a smartphone, computer, or tablet—we always measure our findings based on repairability. Is the device’s battery easy to replace? Can you fix a cracked display without hassle? We’ve never awarded a phone more than 9 out of 10 on our repairability score, because the last point is for a public repair manual for the product. Even Motorola, maker of the most repairable smartphone we’ve disassembled, hasn’t released the repair manual for their phone. So we were very excited when Fairphone asked us to help them write a public repair manual for their first phone. Fairphone took care of the beginning of their phones’ lives; we wanted to help people take care of their phones’ lifespan. 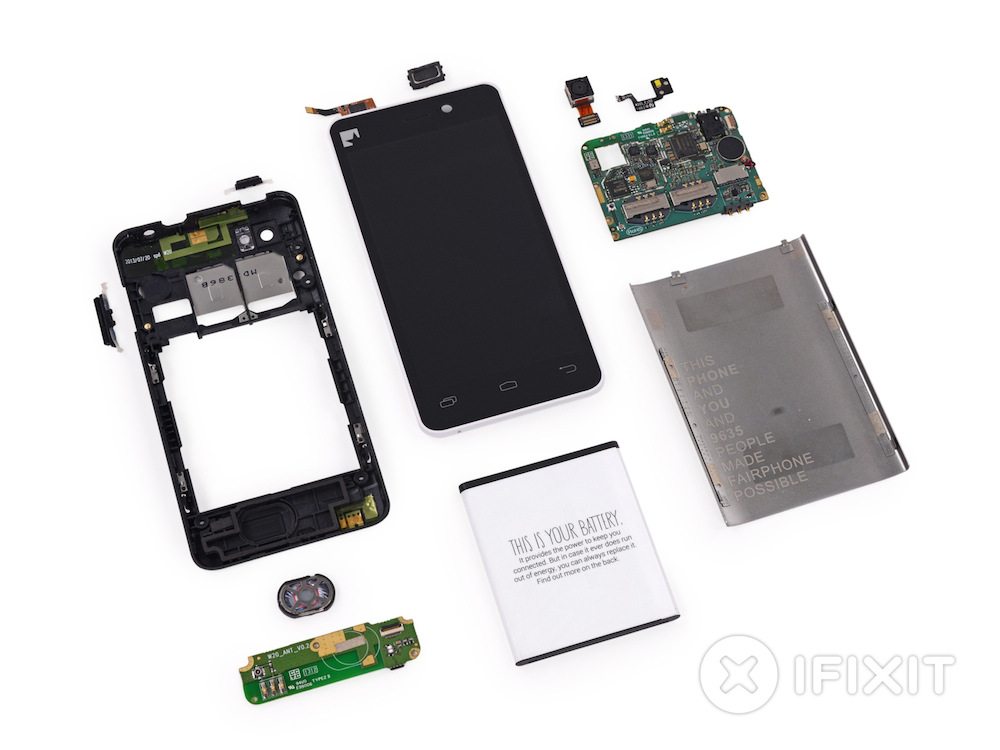 Fairphone Teardown.
We wrote a Fairphone repair manual – offering guides for everything from display, battery, and motherboard replacements. Fairphone is making sure replacement parts are in ready supply, and they are including the iFixit app on every phone—so every phone comes with the repair manual. So while Fairphone’s accomplishments may seem small, they are planting the necessary seeds for a better social and ecological future.

Honestly, I’m not sure if ethical cell phones are part of our future. I’d like them to be. A lot of my friends would, too. Someday, I want to buy a phone without having to worry about whether I’m funding child labor in Indonesia or 24-hour shifts in China. But will big tech ever have strong enough incentives to make a long-lasting, environmentally sustainable smartphone? I’m not entirely convinced that our addiction to new tech will ever come without the price of environmental and human suffering. But wouldn’t it be great if it didn’t?