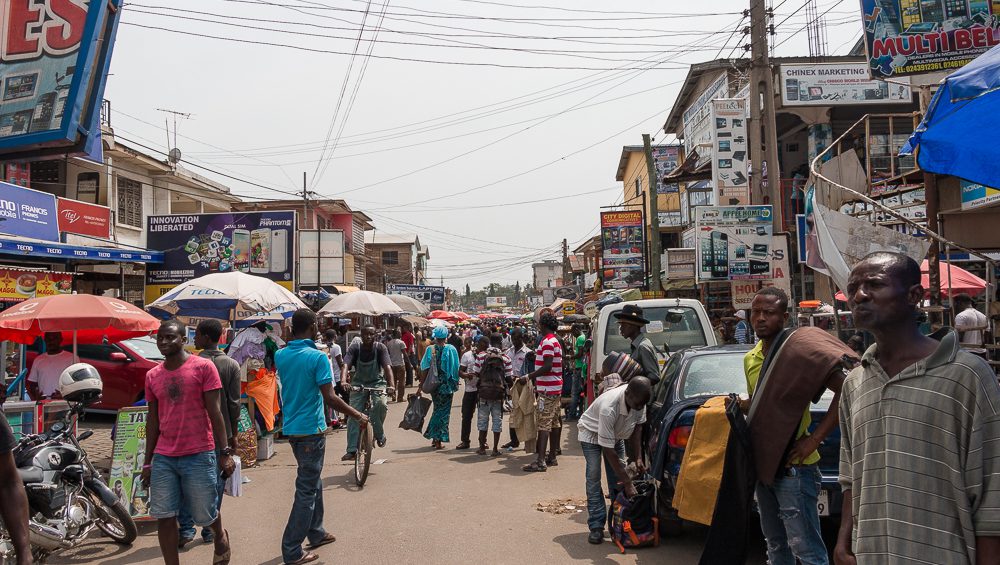 [Editor’s Note: In this blog post, team members Bibi and Raluca deliver their report on their recent trip to Ghana, where they were accompanied by Joost de Kluijver of Closing the Loop. They discuss the scope of their trip, introduce partners, talk about the meetings they conducted, and give a view of the future developments in the area of recycling e-waste. – Joe Mier, Community Manager]

Addressing electronic waste (“e-waste”) is a pivotal part of Fairphone’s holistic approach to the life cycle of a phone and, we believe, an important part of our responsibility as a phone maker. While most of our work of last year focused more on the first steps of the phone’s life – sourcing minerals, assembly and manufacturing, and product development – we are now engaging in actions to address the phone’s end-of-life phase, as part of our mission statement. We’ve thus partnered with Closing the Loop, a Dutch foundation, to facilitate e-waste recycling in countries where recycling programs are scarce or do not exist. Our overarching goal is to work with local organizations to set up collection programs and awareness-raising projects in areas of the world with severe e-waste problems, and look into the possibility to re-use some of the materials we recycle for our future production.

This blog is a follow-up to our post from the end of November discussing our take-back phone plan in Ghana. 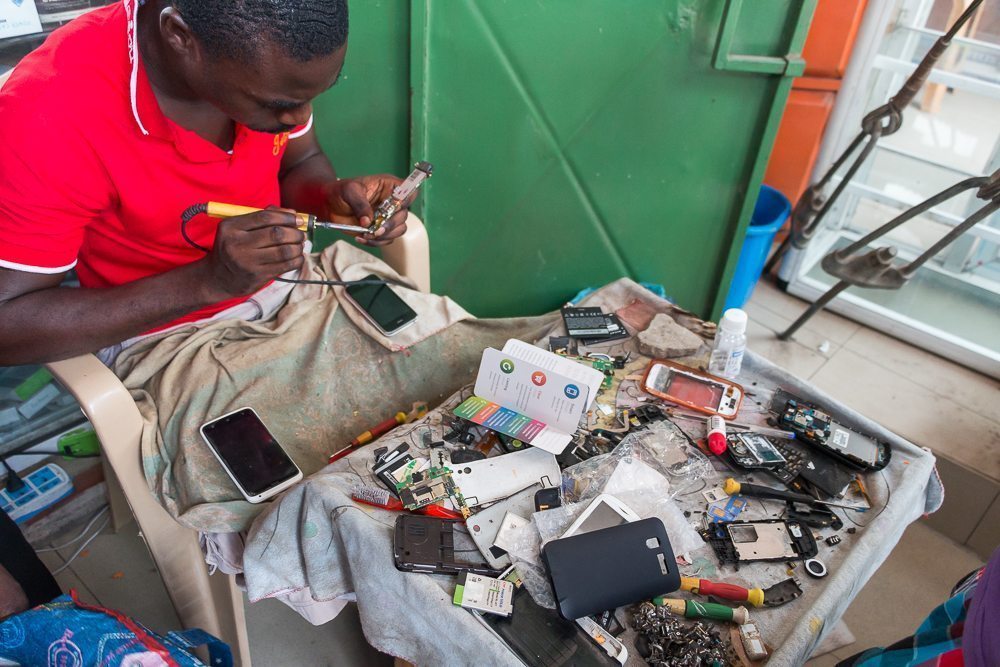 Ingenuity with simple tools and learning by doing.

Part of the price of our first Fairphone in 2013 consisted of two premiums. One of these went to the Worker Welfare Fund, which empowers workers to take part in deciding what to invest in in the factory in which they work (for example, with their own wages or other areas of improvements for themselves and co-workers). The other premium, at €3, was reserved for our e-waste collection program.

With the purchase of the Fairphone, our buyers invested directly in a program that retrieves at least 75,000 mobile phones that have reached their end-of-life in Ghana. By doing so, together we can ensure that these phones won’t end up becoming dismantled poorly, burned, or dumped creating negative social or environmental impact.

Going forward, these phones should be recycled in the countries where they reach their end-of-life, but this will take some years, major investments and strong partnerships. In the meantime, we hope that taking responsibility for the full lifecycle of our products is the first step to addressing the problems of e-waste.

But let’s take a few steps back: just a little over two weeks ago, my colleague Raluca (a new member of the Fairphone team) and myself set out on our trip to Ghana. The overall purpose of this initial trip was to do research, establish some facts, meet the partners of Closing the Loop and make progress on the project that Closing the Loop has developed since it started over 3 years ago. This included some local awareness-raising but, of course, with a camera at our sides, we hope our trip also serves as some awareness raising amongst our community here, as well. From a more practical point of view, we were in Ghana to inspect how the collection of phones was managed and how community outreach is currently carried out by local partners. We wanted to see for ourselves the phones that had been collected thus far, so we needed to meet and talk to environmental authorities to be able to explain shipping and permit procedures. Lastly, we wanted to meet potential new partners to improve or increase best efforts and local collection and recycling procedures in future stages.

Arriving in Accra, the capital of Ghana, the city embraces you like a cozy blanket. I don’t just mean the way the Ghanaian tropical climate replaced Amsterdam’s first cold days of February, but rather about the openness and friendliness of the people there. “Akwabaa” or “You are welcome” are the first introductory phrases you hear and see. A handshake is firm and concluded with a catchy click between both participants thumb and middle finger. Overall people seem eager to explain everything that goes on in Ghana based on the elaborate answers we get to our many, many questions. 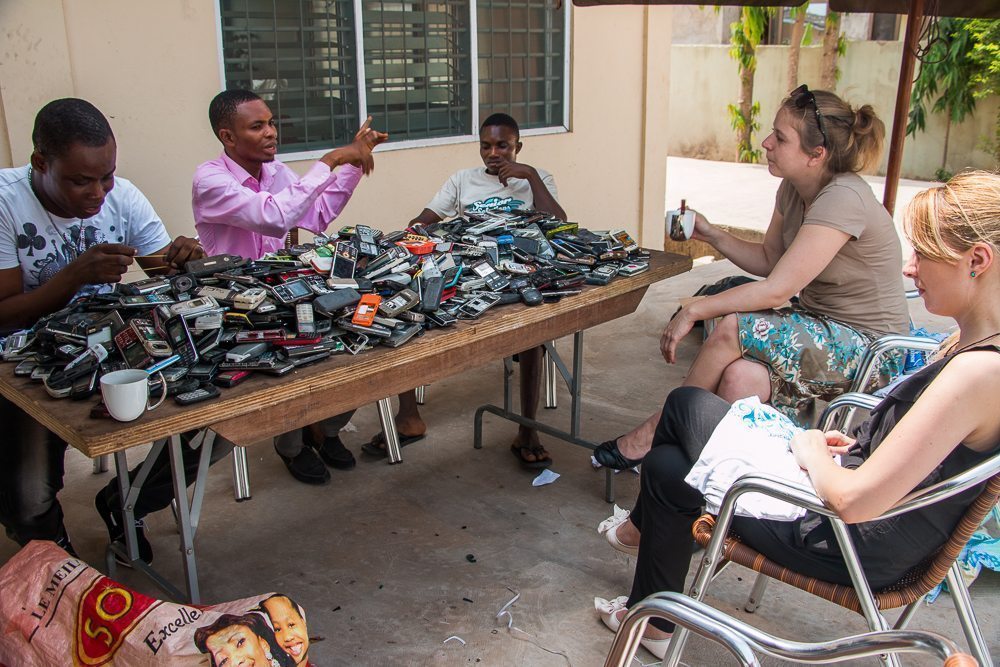 Raluca and Bibi talking to local partners collecting phones in Greater Accra.
I’m not sure if it’s because in our minds we had such a clear purpose, but the presence of mobile phones in Accra seemed overwhelming. Everywhere you looked, there were billboards with advertisements of mobile phone producers and providers as well as stands and vendors selling airtime on every corner of the street. The concept of “end-of-life” gained a whole new dimension after our one-week trip, ranging from the ingenuity of many mobile phone repairmen who are learning by doing, the extensive repair and re-use of mobile phones (people talking about passing on phones to their sons, who passed it on to their sister, she in turn to a cousin, who passed it on… and so on and so on) to the dump where they end up as “waste” in the open air, for example in Agbogbloshie, where people scavenge for usable parts to re-sell.

Together with the head of Closing the Loop, Joost de Kluijver, we visited their local Ghanaian project partner “Nana,” a well-connected socially engaged and generous businessman; they had originally been connected through Closing the Loop, and its parent company TechReturns. In addition to other social and business projects, Nana also resells mobile phones in Greater Accra. Therefore he comes across a lot of situations where people (other resellers, repairmen, consumers) have mobile phones that can’t be repaired anymore and nothing to do with it but throw it out as trash or give it to anyone willing to take it for free or even some small fee, usually entering into the less formal, more underground “waste stream” to a dumping and burning ground such as Agbogbloshie. 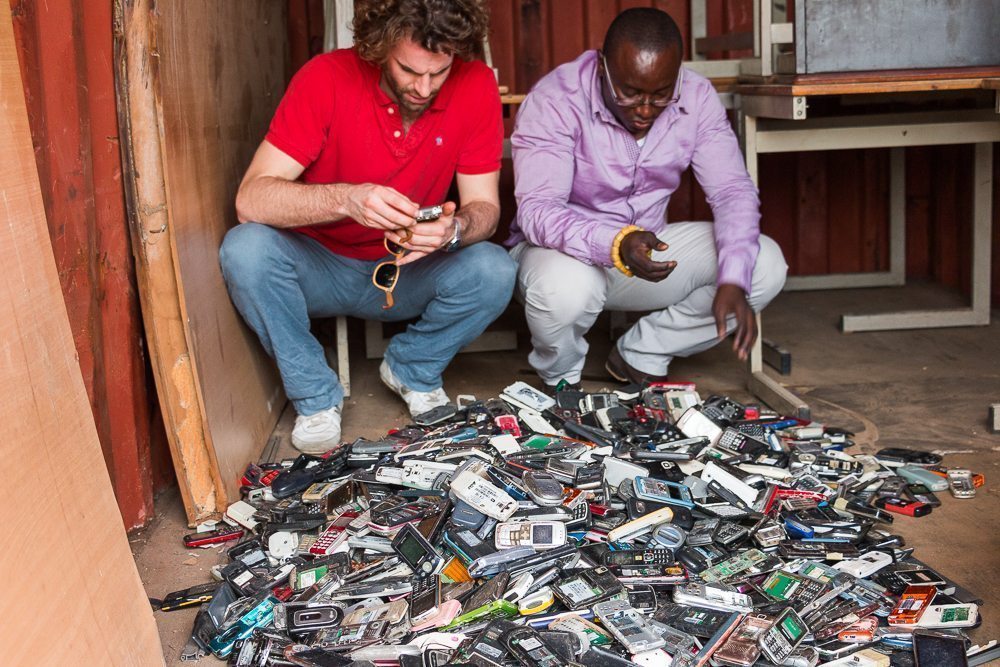 Joost and Nana looking over the phones collected in the churches.

Together with Closing the Loop, Nana has set up a structure to collect these phones before they enter into this circuit. Together with a group of approximately 10 to 15 collectors, Nana visits repair shops and other places where they can collect the phones and explain the need to proper recycling. They go around in duos or individually to places in Accra and surrounding villages. They talk to pastors and chiefs, so that in places like church services, people are asked to turn in their broken phones. 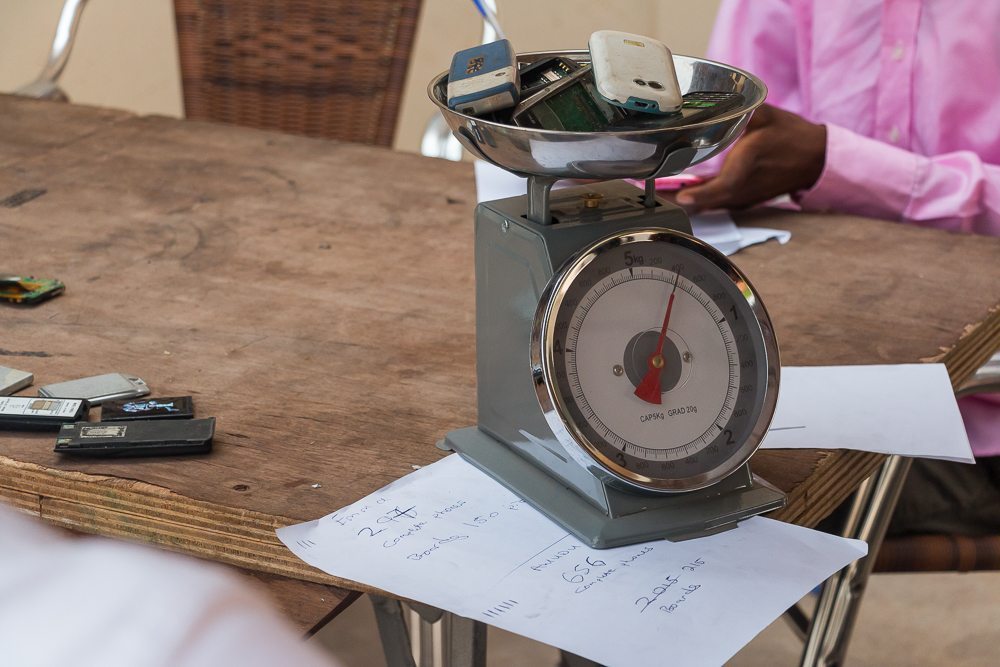 The phones are being weighed and registered after the collectors bring them.

An important conclusion we drew from talking to the men who collect the phones, was the need for educational material to hand out that will assist the collectors in validating the story about collection and recycling. For example, they could distinguish themselves by wearing T-shirts with a comic, illustration, or other way of visual storytelling (due to the more than 65 local dialects, visual storytelling is more effective than plain written text in English).

Agbogbloshie is a suburb of Accra on the banks of the Korle Lagoon, an area that has become an informal dump for electronic waste from illegal shipments coming from industralized countries. When we arrived, we saw plastic covering the pools and water of the Lagoon, where the main activities (dismantling and burning of material) take place on the shore. 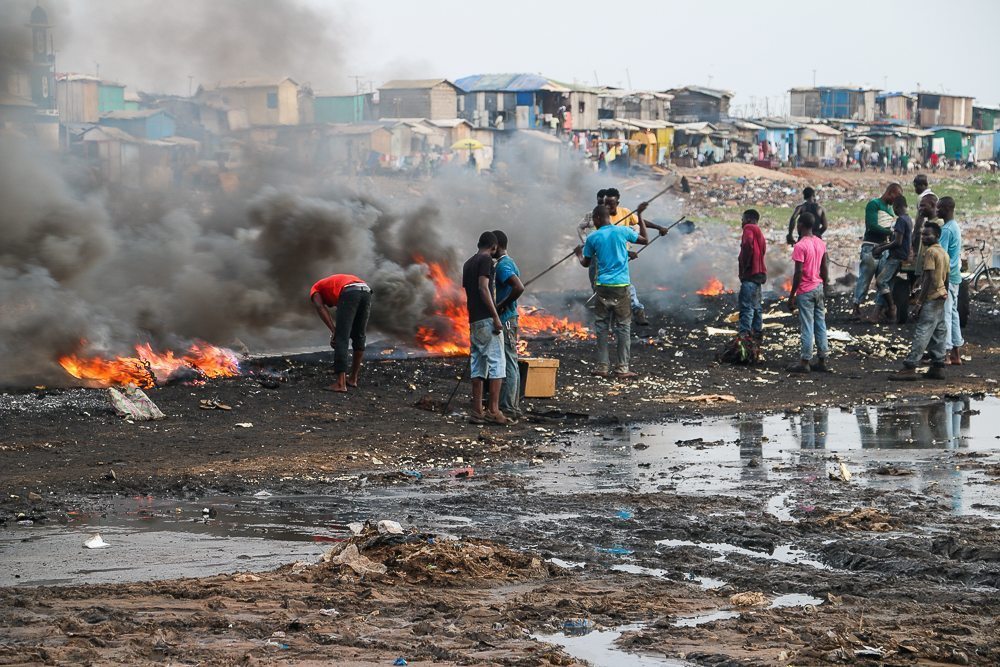 Burning of cables to extract the copper on the shore at the edge of Agbogbloshie.
We were there together with Ghanaian journalist and environmental activist Mike Anane, who visits the site often to report on shipments and dumpings that occur. On the site, we saw mostly children and teenagers, who told us they mostly were there for the money from burning copper and aluminium from wires. 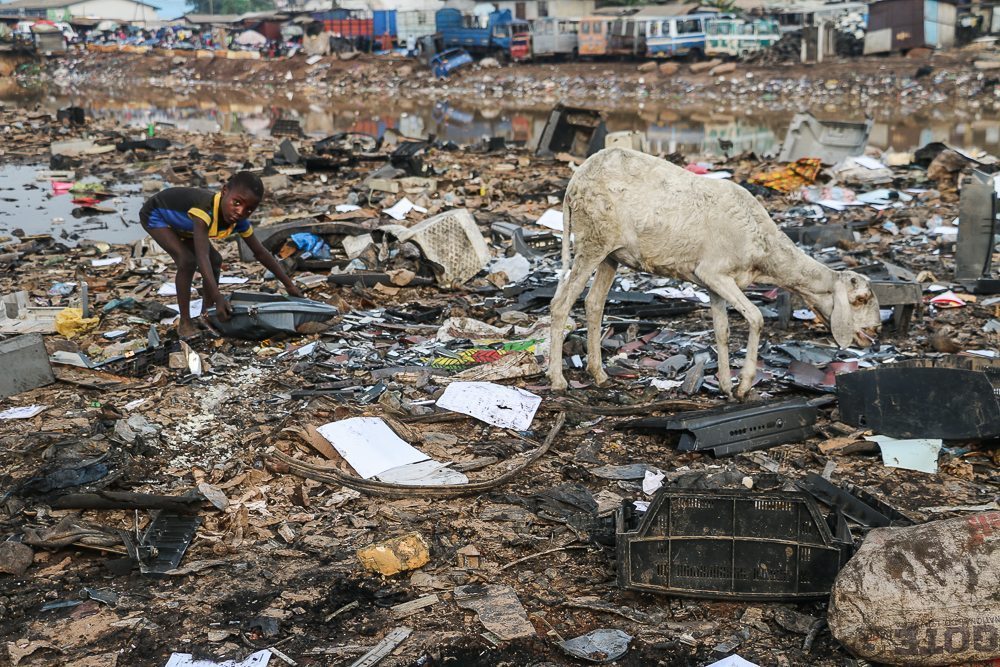 After school, kids go to Agbogbloshie to collect copper and aluminium to make a little extra money.

Our guide Mike says there are between 40,000 and 70,000 people who work at Agbogbloshie every day. Some are from the Greater Accra area, but most come down from more northern provinces who then sleep on site or in the settlements on the edge of the site. They say the material they are mostly looking for is copper and aluminium. One 12-year-old told us he is from around the area and usually goes there every weekday after school. He wanted to make some extra money for his mother and to buy food. He could sell a kilo of copper for about 2 Ghanaian Cedi, approximately € 0.60 cents. We observed, looking into his almost empty bag with dirt and scattered pieces of PCBs (printed circuit boards) still somewhat smouldering cables, that he had not made it to a kilo. But that day, it was Saturday, and he would continue to collect more.

The sight of the dump was one of the most poignant, urgent motivations to start putting the electronic waste problem on the agenda and to get our hands dirty going forward with this project. (And shoes! We could not get them clean anymore and two days after visiting the dump, they grew mold).

The export of the 75,000 phones is the end of the project in Ghana in terms of the amount of phones we are able to collect with the premiums of the first 25,000 Fairphones. But of course, this is just the beginning to make a real impact. To be able to set up large-scale professional infrastructure for collection, storing, recycling and consumer mobilization in Ghana, we need more well-connected and reliable partners with the ability to reach out to a lot of people. In that respect and because the problem is too big to solve it on our own, Fairphone and Closing the Loop met with leading mobile phone providers in Ghana to discuss possible ways to collaborate and connect infrastructures in the near future. 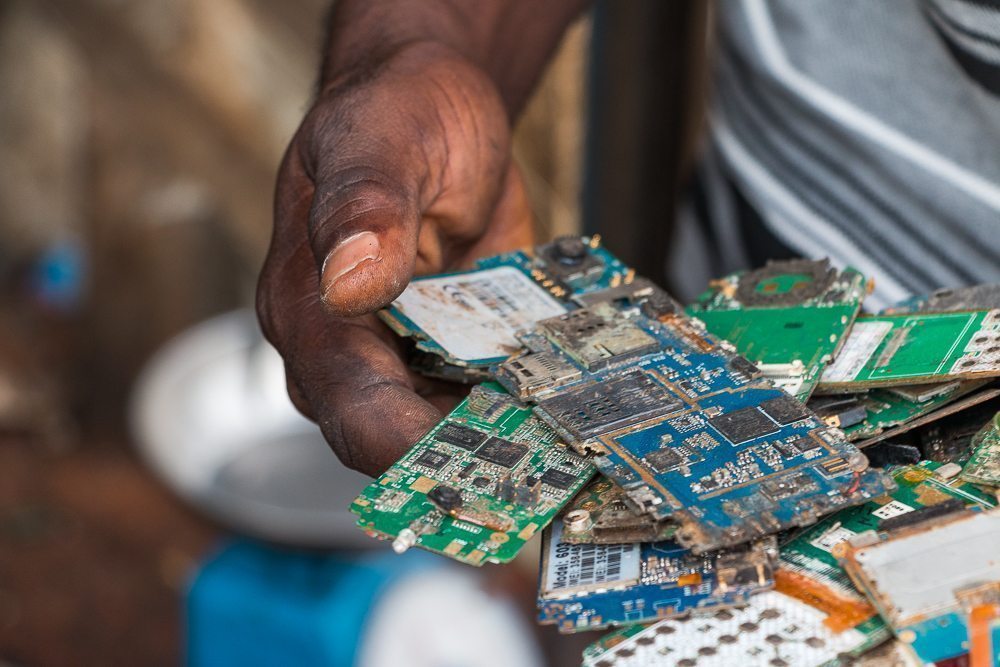 A container full of Printed Circuit Boards (PCBs) at Agbogbloshie.

Overall, these potential partners seemed positive towards a nationwide campaign where they could use their shops and other retail points, festivals, commercials and mobile teams to facilitate and promote the collection of scrap phones. Soon we will continue working on the follow-up of the first shipment and subsequent recycling in Europe and share our project plans with these and other potential partners inside and out of Ghana.