What’s in a Life-Cycle Assessment?

I suppose some (or most!) of you are concerned about the environmental issues related to the shiny, cool Fairphone-to-be, right? Some of you have already showed specific interest in our carbon, water, or ecological footprint. So I want to take the opportunity to give you an update about what’s going on in-house to get insights in the impacts on our lovely Earth.

As a research assistant at Fairphone, I will be in charge for the coming months of investigating the contribution of our product to different environmental troubles. From my early childhood I always worried much about ecological problems thanks to my organic-greenist parents, and these problems don’t seem to be of less importance to me as of now, indeed.

Let me start with a quick introduction to LCA: Life-Cycle Assessment. Basically, LCA is a tool that captures and measures the impact that a product has on the environment. It is able to set up limits, make comparisons, identify hot-spots, or just better understand the impacts on our surrounding natural world. Traditionally, this is also done with different eco-labels, Design for Environment (DfE), ecological footprints, and so on. But the LCA is the most widely-used and recognized tool due to its reliable, scientifically sound and holistic approach. The first LCAs were made around twenty years ago, and I’d like to be clear on what LCA encompasses.

The life-cycle viewpoint means that we are looking into the whole life of the product (from raw material extraction, through production and usage, up to recycling or disposal). That helps us understand our supply chain and how a change on one side can affect the other side and makes us sure that reduction of the environmental impact at one stage in the life cycle does not come at the price of an increase at another stage.

For example, we may focus on finding a supplier with a display for the Fairphone that is a bit more energy-efficient, but then we have to consider the potentially increased electricity need  during its production compared to the screen we have now. That also means, even for simple products, the whole system behind the life cycle could easily be hundreds of different processes. You can imagine for such complex things like a phone, we are talking about thousands of different components and mapping the whole system is extremely hard.

Thankfully, Bibi on the Fairphone team has been working with me to coordinate a research structure that I’ll discuss later. For now I’d like to get into some examples of LCAs with the help of Karsten Schischke (Fraunhofer Institute, Berlin). His  “LCA to go” project aims to give help to small and medium sized enterprises who want to enjoy the benefit of LCAs without having extensive expertise in it. He came by the office to chat about what control Fairphone has over its environmental impact. Where it stands now, we have to focus on packaging, transport, or casing of the phone, whereas more substantial work should be done in the future on issues like, production of chipsets or printed circuit board (PCB). This is especially true because we are not manufacturers and we use a licensed design, thus we rely on a number of suppliers. We hope to attract other companies and suppliers that believe in our mission and follow our values. But nothing’s perfect. This is a learning process. By doing the LCA, we understand our supply chain a bit better.

But let’s get into some nice graphs and figures that Karsten prepared for us as a first step toward understanding these complex systems!

One of the most common questions about a product’s footprint is about greenhouse gas emissions. These are mainly related to the highly-complex production process – and less about how a phone is used (eg, how much electricity it consumes). That means, a device should be used as long as possible! I’m including the graphics below to give an overview of the carbon footprint of a generic smartphone (production, use, transport, and disposal). 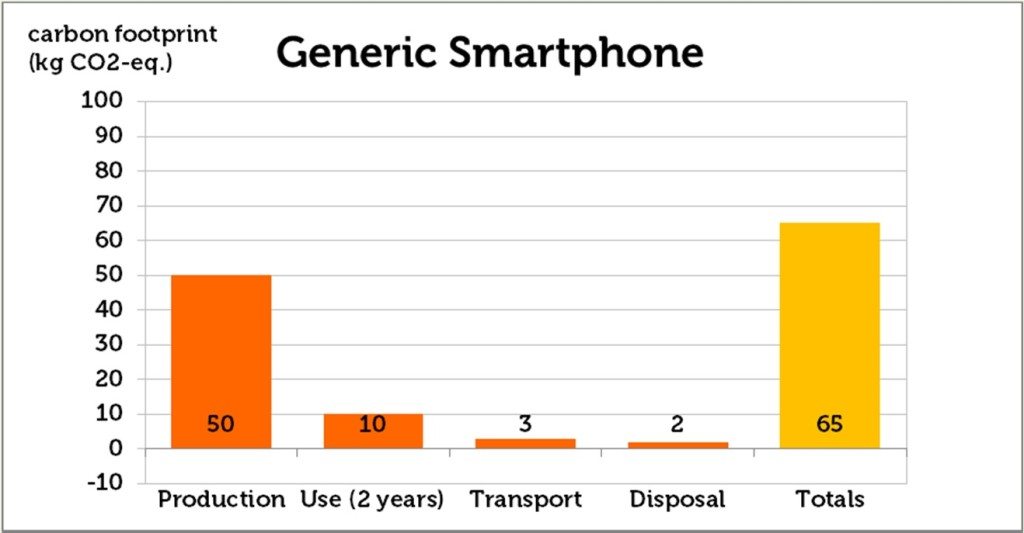 Below you can also see a more-detailed explanation for what carbon footprint is created from the many aspects of the production process. 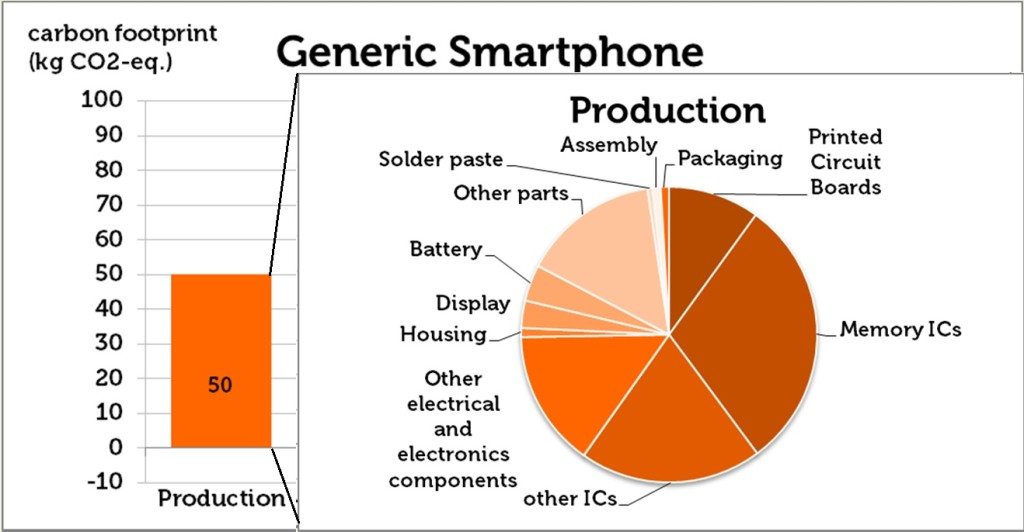 As anything that extends the lifetime of a phone is good to lower overall carbon emissions, we can take 2 specific examples in this year’s Fairphone that will extend the phone’s life: dual-SIM capability, and external microSD storage.

Further, certain decisions like NOT making a charger/cable as default – could greatly reduce the generation of e-waste, and Karsten suggests it could save 1 kg of CO2 related to the production of the charger. Although 1 kg is only a small fraction of the total footprint, it is still a bit of an improvement. It also explains why Fairphone has made a cable charger optional for consumers, to reduce unnecessary waste and greenhouse gas emissions by giving people a cable that they might already have in their homes.

Different environmental impacts during the lifetime

So much about me and LCA, but how can Fairphone community finally make use of this whole thing?

First, we would get those important numbers about our performance, so we can tell you the environmental impact of your phone. Second, we get an image of environmental hot-spots in the life cycle, so than we can decide where to focus on. But that is not all. After putting heads together with other people from the team, now its clear to me that Fairphone aims more, by integrating the life cycle thinking into our decision making itself. 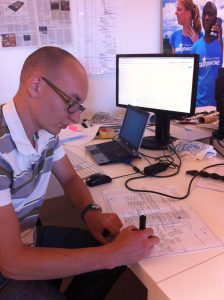 As you can see, I’m hard at work to put together a first draft of the life cycle of the Fairphone. After mapping the whole supply chain as far as possible, and putting everything into a model, we can set up variables that we can change later to see how our footprint would differ. Such variables could be the number of SIM slots, or the standby power consumption of the charger just to name a few. This would help us to choose suppliers or to make recommendations for the different players in the supply chain, including the users themselves (I have already one for you: please remove your charger from the plug after charging any electronics!).

There’s still a long way to go, but the good news is we can do it step-by-step (just like the whole Fairphone project itself). Normally LCA is performed in iterations: in the first round a simplified approach is used with focusing only on the most important processes, then the following iterations gradually create a more advanced system that is closer to reality.

In August we’re setting up a working group around LCA in order to finish the first iteration before the Fairphone arrives to Europe. The work should include a scope definition and product system mapping first, then have a database structure using the open-source openLCA software.

Around the last week of August we plan to start to fill data from different data sources into the database. The best would be to get data directly from the suppliers then we would fill the gaps using different generic data sources also (we will use both but show what is real data and what is from databases). Until the end of September hopefully we can finish the hardest part – the data collection. But until that date I will certainly come up with updates about the progress.

The first simplified LCA is expected to be finished in the next three to four months. The next round would be shorter or longer depending on the results of the first iteration, but keeping an eye on environmental problems is a continuous job and never be really ended as long as we aim to create Fairphones in the future.