Editor’s Note: I asked designer Maarten Hertog to give his personal account of last weekend’s Fairphone Design Bootcamp. Expect a full overview of the workshop’s results in our next post. To clarify: this will NOT change the design of this year’s phone. – Joe Mier, FP Community Manager

A Fairphone boot camp? Is that living in a tent for three days and building a phone from sticks? No, but what is it?! I didn’t know what to expect exactly, but I knew that we’d be imagining the future of the Fairphone design. 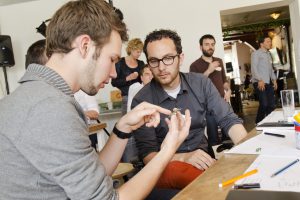 My name is Maarten Hertog, and I’m an Industrial Designer with a passion for electronics. Through Facebook I heard about the Fairphone, not strange because it’s an initiative that’s based on open design. Normally I work as a seat designer (Yes, I design car seats for all kinds of public transit!) which involves electronics, but for this task I took two days off to give my input to a phone that is good for people and the environment.

Thursday morning I travelled from Utrecht to Amsterdam with my opinion about how the current mobile phone is unfair and with all my ideas how we can improve this. And I was joined by people from all over – different parts of the Netherlands, and also Germany, Switzerland, England and Uruguay. This group differed from an experienced electrical engineer to a person that is between high school and art school – a very interesting and inspiring group.

After several introductory presentations by Bas van Abel, we were divided into three group with each of their own challenges:

For me, all the challenges sounded interesting, but I finally decided on the second challenge. How do we make this beloved device last longer in the hands of the owner? Six others joined me in this challenge. Because everybody brought their own opinion, the first discussion about how we perceive the challenge took quite a long time. Perhaps also fed by the presentation about circular economies by Mark Shayler and the presentation about emotionally-durable design by Hugh Knowles. Luckily, at the end of the day we came to the same conclusion: By making people more attached to their phone, we were also able to make the phone last longer. But how could we achieve this feeling with the user? 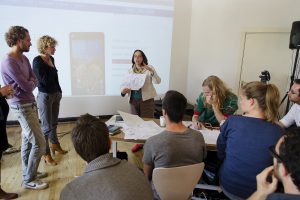 On Friday, the second day, it was time to create the concept. But first we learned about Cradle-to-Cradle design explained by Eric Pfromm and Christian Schüten, and we learned about Open Source Design explained by Matt Dexter. The day went by fast, but we achieved nice results. Time to celebrate at the bar downstairs. There, we discussed the day and talked about the countries we are all coming from. Although we live close to each other, we have a lot of differences – like ,

Did you know that German people do not understand Swiss German people? And that they mix a beer with soda in Germany and still call it a beer? Many things you learn by listening to people from only a little far away.

So what actually makes the future Fairphone last longer? Our basic thought behind this was that if the user keeps the phone longer it saves energy in transportation and the usage of materials. But to keep your phone longer means something different for each and every person. One wants to have the latest design, another person wants to have the latest technology, and a third person just wants a phone that lasts.

A solution is found by a modular phone, where only the components are switched out that need to be replaced. This was manifested in the Fair+ service: the longer you keep your phone, the better it is. And while you do this, your phone is maintained until it really dies, and you can save money for your future Fairphone and you can invest in the Fairphone Foundation. 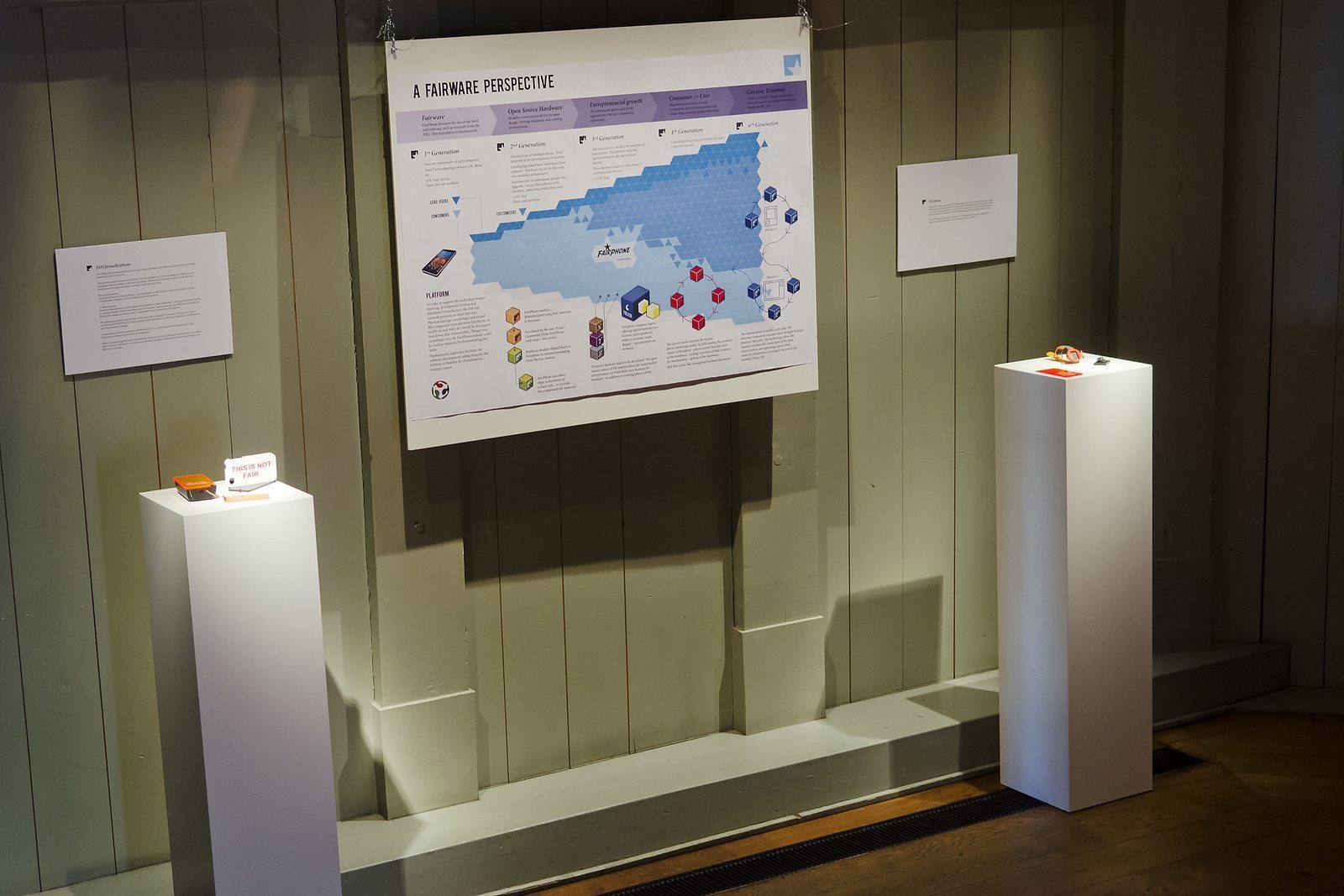 All the results of all group had a certain overlap, because they were strongly related to each other. The DIY challenge went more in-depth with the modularity of the phone. It could even be used like an arduino, a device with which you can build and program your own electrical device. But also they thought about how the circular economy can be a benefit for the modularity of the Fairphone. For example, print your own cover in a Fablab and make the service providers a part of the Fairphone community. 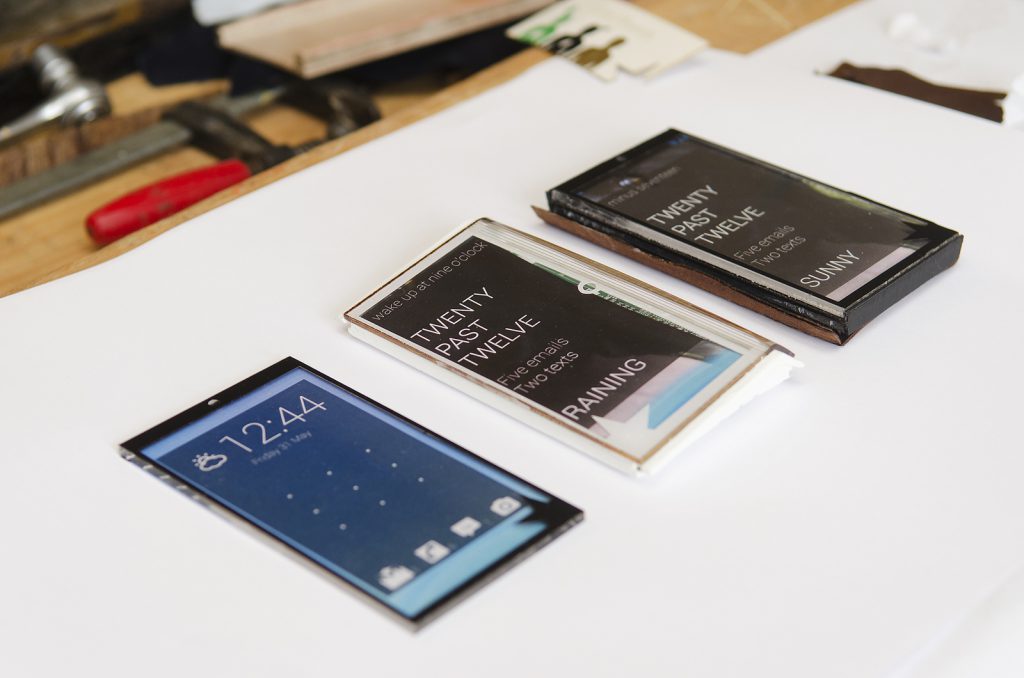 During the bootcamp, the Fairphone was also redesigned to make it feel like a fair phone. The outer appearance was inspired by the Prius: it should look different to make a statement. Also the software was changed: it must make the user conscious that it is using a better phone and show that the user is part of a community. Also it gives more feedback about the energy usage of the phone by color.

Now, looking back to my first time of open designing I can say that I really enjoyed it. Because now when I’m back home, I can still follow the results of our design camp in a big, comfortable, beautiful tent made of brick walls. Also I shared the ideas I had, so they won’t just stay in my head. And that’s also what Fairphone is about. It’s a phone that is developed by the community who all want to work toward improving the status quo by combining their abilities.

Which designs will end up in the Fairphone? For that, I’ll leave it up to the Fairphone team to explain in a later blog post. For now, we’ll just stay tuned at fairphone.com. See you there!

All photos by Arne Kuilman. Used under the Creative Commons license.