Developing the Fairphone 2 has given us the opportunity to start working more closely with individual suppliers. Besides our first tier supplier Hi-P, we’ve recently introduced you to second-tier supplier GSN. In this blogpost, we want to update you on our efforts to open up the gold supply chain and introduce you to our partner AT&S, the manufacturer of high-end printed circuit boards (PCBs) for the Fairphone 2.

AT&S is headquartered in Austria and their products are widely used in mobile devices as well as in the industrial,  automotive and medical sectors. The company has a very advanced vision for sustainability and transparency and publishes an elaborate corporate sustainability report showing concrete targets and figures on the use of resources, waste generation, energy consumption and more. They’ve also developed ways of recycling the traces of metals that are left as residue in the production processes.

Because PCBs contain gold, we were especially interested in partnering with AT&S to find an innovative approach to sourcing more responsible minerals. And as Europe’s largest printed circuit board manufacturer with a major presence in Asia, they are in an excellent position to be a trailblazer and influence better business practices throughout their entire sector.

We’re opening up the gold supply chain to improve traceability – the route from mine to the end product – and to raise the bar for increased transparency. Gold is notorious for its risk of smuggling and is one of four official conflict minerals as defined by the Dodd-Frank Act. Gaining a better understanding of this supply chain is our first step to identify opportunities to integrate gold that creates a positive impact for local mining communities, such as Fairtrade gold.

As part of this ambition, we began taking a closer look at the gold required to produce our printed circuit boards. When we started working with AT&S about a year ago, we immediately shared our idea to map the route of the gold that AT&S uses for their PCBs, and they were very responsive and eager to collaborate. Therefore, in July 2015 we went to China to make direct contact with second and third-tier suppliers and literally follow the path that gold takes from the finished PCB all the way back to the mine.

Tracing the gold used in the Fairphone 2. Our trip with AT&S, the circuit board manufacturer, in July 2015.
Our trip started at the AT&S plant in Shanghai where our PCBs are being manufactured. Here, on a continuous basis, large panels containing numerous PCBs are electroplated by being dipped into a bath containing gold salt (potassium aurous cyanide). Because the bath is regularly refilled with gold salt, it’s nearly impossible to know which gold sticks to a specific batch of PCBs, including those used in the Fairphone 2. Regardless, we want to support the purchase of more responsible gold salt for use by AT&S.

With this in mind, we went to Yantai, China with AT&S to visit Zhaojin Kanfort, their gold salt supplier. Meeting a social enterprise like Fairphone and hearing our overall mission and ambitions to source fairer gold was a new experience for them. It was the first time they had ever been asked to join such a process, but nevertheless, they met our ideas with enthusiasm and a genuine willingness to be involved.

Zhaojin Kanfort showed us parts of their gold salt production process and informed us that they are currently purchasing gold through the Shanghai Gold Exchange (SGE). As the gold market is influential to China’s currency, all gold transactions go through this carefully regulated trading platform. Our last blog post about finding fairer sources of gold ended at the SGE, and in the meantime it’s become clear it’s nearly impossible to trace the exact origin of a specific batch of gold purchased via this exchange. 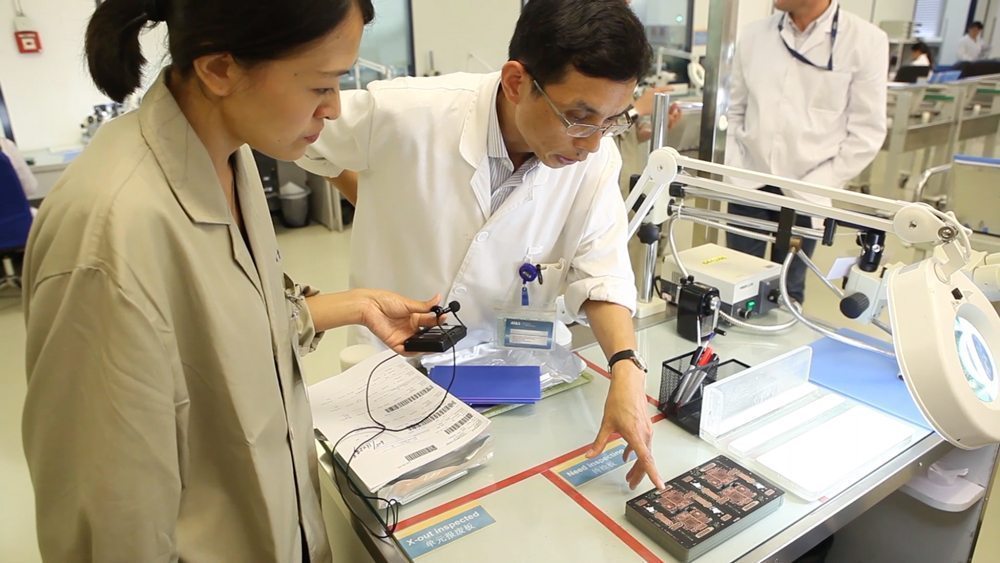 Colin Li shows Mulan, our project manager, the Fairphone 2 circuit board at the AT&S Shanghai facility.

Our first time in a gold mine

Nevertheless, Zhaojin Kanfort expressed their commitment to continue exploring other opportunities with us for purchasing Fairtrade gold to use in the production of their gold salt. And to support our efforts to map the steps that gold travels from a mine to an end product, they arranged for us to visit a gold mine near their facility in Yantai.

The mine we visited is one of many that belongs to Zhaojin Mining Industry Co. Ltd. For both Fairphone and AT&S, this was our first-ever visit to a gold mine. Compared to the artisanal mines we have seen in the African Great Lakes Region, it was a well-organized, large-scale industrial mine. Inside the mine itself, we were surprised to see nothing that looks like actual gold – massive piles of black rock are extracted and then later ground into black sand. To give you an impression of the work involved, it takes 1 ton of this black rock to generate 0.8 grams of gold.

For both Fairphone and AT&S, this was our first-ever visit to a gold mine. Compared to the artisanal mines we have seen in the African Great Lakes Region, it was a well-organized, large-scale industrial mine.

While the visit to the mine was very useful for gaining a better understanding of how gold enters the mobile phone supply chain, we can’t be certain whether the particular gold mined here is used by Zhaojin Kanfort to produce gold salt, let alone whether it is used by AT&S for the production of Fairphone’s PCBs. 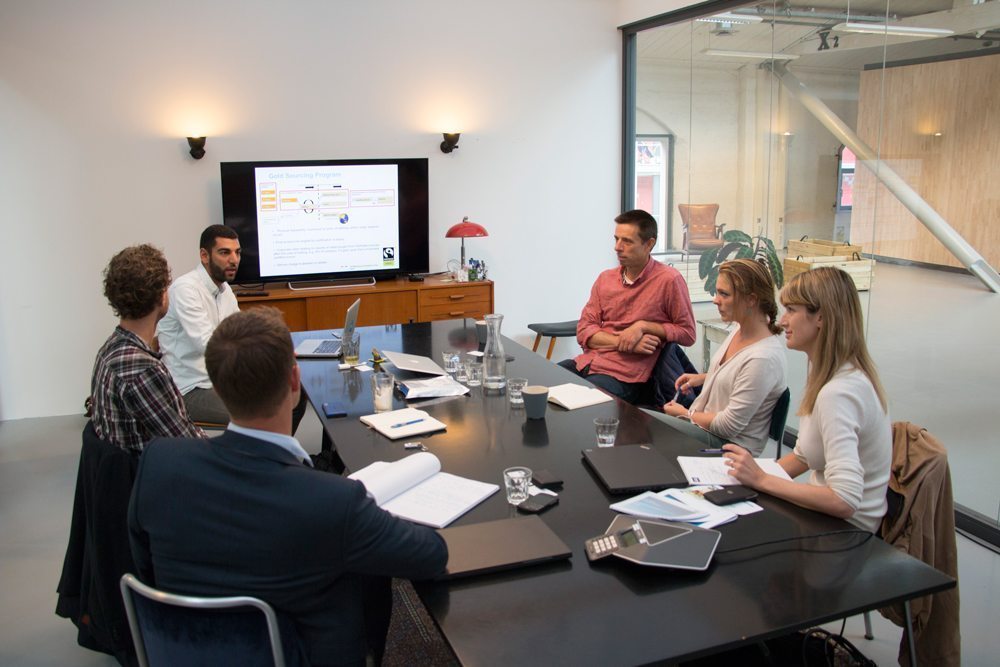 After everything we have learned about the gold supply chain in general and sourcing practices in China in particular, we’re very pleased to have a clearer understanding of how gold travels from mines all the way into the Fairphone 2. We are also enthusiastic about having partners that are on board with exploring potential options for supporting the purchase of Fairtrade gold and connecting it to our supply chain.

After returning to Amsterdam, we have continued our research and conversations with AT&S and Zhaojin Kanfort. In mid-October, we met with both AT&S and Fairtrade / Max Havelaar at the Fairphone office in Amsterdam and concluded that there might still be an option to source more responsible gold for the Fairphone 2.

A significant advantage is that Zhaojin Kanfort has a specific license to import gold directly from Hong Kong to China, which means the gold does not need to be traded through the Shanghai Gold Exchange. Fairphone could purchase Fairtrade gold which would be imported by Kanfort’s office in Hong Kong. From there, the gold would travel to their facility in Yantai, China.

This way, Zhaojin Kanfort can use the Fairtrade gold directly in their production processes to make gold salt and sell this to AT&S for their PCBs, without losing traceability at the Shanghai Gold Exchange. Even though the Fairtrade gold would be mass-balanced with other sources to produce the gold salt, it would be a first to be able to trace this gold up to the supply chain of electronics and support Fairtrade certified gold mines with the production of Fairphone 2. 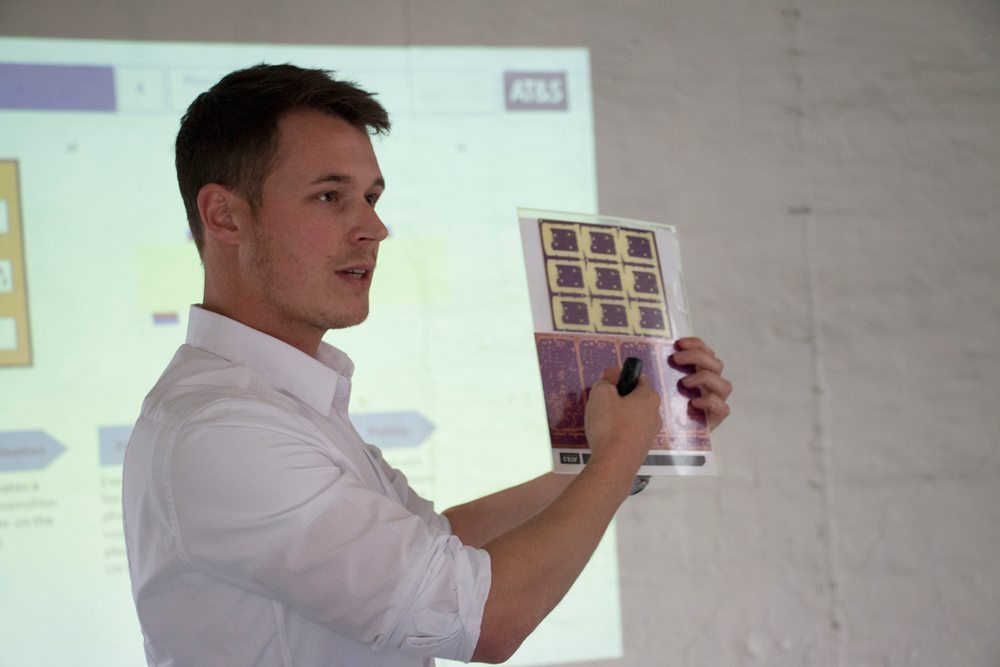 Markus from AT&S giving an introduction of the PCB production process to the Fairphone team in Amsterdam.

It would be a first to be able to trace this gold and support Fairtrade certified gold mines with the production of Fairphone 2.

We are researching the details of this option, and feel that we are very close. But it’s only if we have sorted out all the arrangements, agreements and logistics, that we can confirm this important step towards fairer electronics. It is an exciting pilot period and as soon as we have concrete information about our pursuit of Fairtrade gold, you’ll be the first to know.