Good news for Fairphone! After 16 months of delay, America has agreed to the introduction of the anti-conflict minerals law. For over 6.000 electronics companies, that are listed on U.S. exchange stock, it is no longer possible to use gold, coltan, tungsten, tin and ore from Congo, without indicating from which mines they are extracted.

This is the first legal step towards retrieving the financial sting out of the war in eastern Congo.

It is the first time that through legislation, companies are made responsible for this part of their production.

There is a bloody conflict going on for over ten years in eastern Congo. Militias, rebels and divisional army units are fighting for the control of the lucrative mineral trade. This is accompanied by unprecedented violence, including forced labor, child labor and rape. Recently the conflict flared up again when a new militia group (M23) entered the battlefield. “The electronics industry had been aware of these ‘blood minerals’ in eastern Congo for years, but kept playing dumb.”

It’s an open secret that illegal commodities from Eastern Congo find their way into our computers, laptops, mobile phones and other cool gadgets via Asian assemblage companies. The electronics companies were able to hide behind the argument that the situation around the eastern Congolese mines was cluttered and therefore not under their responsibility, untill last week.

But we have to be remain critical

the next two years the law allows that companies may label there minerals as ‘origin unknown’. For small businesses this is even allowed for the coming four years. In other words: this is a carte blanche for not complying with the law in the next two years. 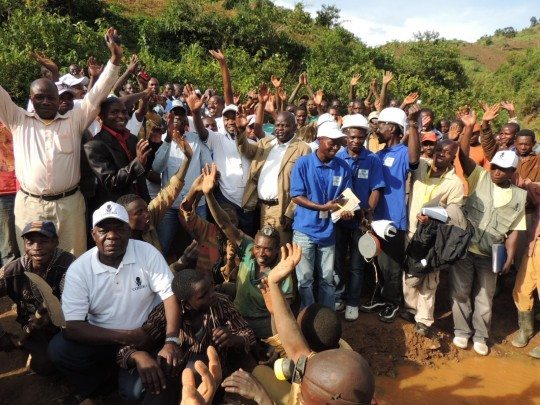 Moreover, the part of the new law functions as a disguised boycott. A potential boycott of minerals from the Congo would have disastrous consequences for the tens of thousands of miners working in the mines in eastern Congo. Much depends on the succeses that are booked when it comes to mine mapping by the Congolese government. Tin industry ITRI (a organization who certified many copper and cobalt mines in the south of the country) will help the government with this.

Meanwhile, we work on the first fair mobile phone. Keep following us!