The search for responsibly sourced gold for the Fairphone

Every smartphone contains dozens of different minerals, including precious metals such as gold. Our roadmap for mining involves responsibly sourcing minerals, starting with the four internationally recognized conflict-minerals: tin, tantalum, tungsten, and gold.

We started our journey toward responsible mineral sourcing by integrating conflict-free tin and conflict-free tantalum from the Democratic Republic of Congo (DRC) into our first Fairphones. However to add gold (and tungsten) from more responsible sources has remained a part of our future goals. Now that we are working on our next model, we can take the design into our own hands which gives us more oversight of our supply chain. Although we don’t yet know the length and the exact route to the final destination, below, we want to take you with us on this exciting trip.

Never knew that gold was even in a phone? You can find gold in very small amounts in a wide range of components, but it is primarily used as a surface coating on the printed circuit board (PCB) as well as on a variety of connectors (like the battery connector).

While copper and silver are actually better conductors of electricity, gold’s superior resistance to corrosion makes it essential for reliable functionality. In short, whereas other minerals may be vulnerable to corrosion when in contact with moisture or oxygen, gold resists such corrosion and will continue to conduct electricity.

Whether used for jewelry, laptops or our Fairphones, gold is fraught with social, environmental and transparency issues at nearly every step in the supply chain. For example, the gold extraction process can lead to mercury pollution and other types of toxic waste that devastate the surrounding landscape and cause widespread health issues. Worldwide, gold miners often face dangerous working conditions with dismal pay, and child labor is also a common practice.

In addition, gold is recognized as a conflict mineral, meaning gold mined in the Democratic Republic of Congo (DRC) and the surrounding areas is known to help finance armed conflict in the region. 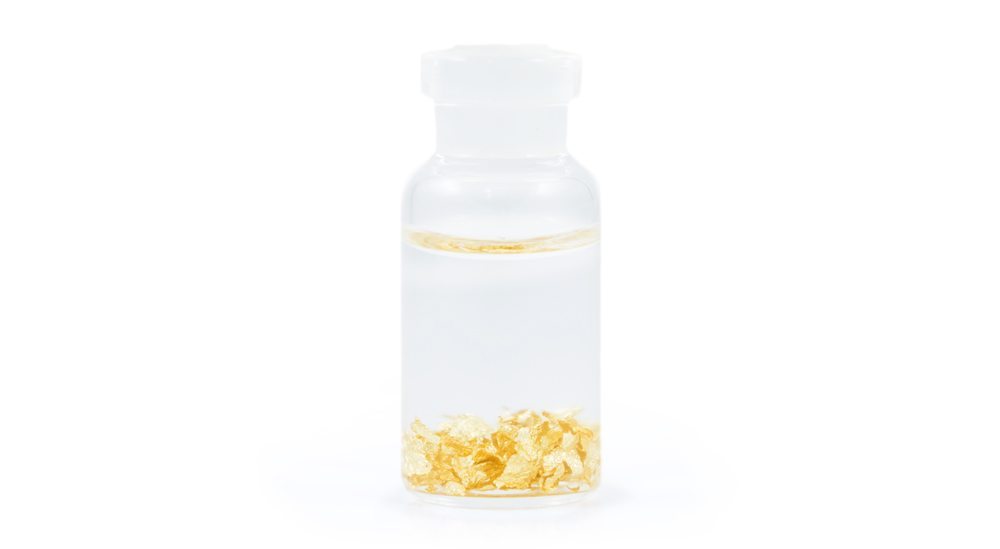 Recent reports indicate that rebel groups are increasingly focusing on gold as a source of income, as it is currently the most valuable mineral mined in the DRC. The high price per gram makes gold relatively easy and very attractive to smuggle. It also makes it especially difficult to regulate and control the trade in gold from this region, or to even make sure it doesn’t “leak” to armed groups.

One of the approaches we had was to use a bottom-up approach by sourcing conflict-free gold from the DRC and then find a manufacturer who would agree to use it in their components, as we did with tin (in the soldering paste) and tantalum (in the capacitors). But we soon understood the infrastructure for a closed supply chain of conflict free gold from the DRC is not yet there, like those that have been set up for the Conflict-Free Tin Initiative and Solutions for Hope. Establishing such a closed supply chain from the DRC would not take place in time of the production planning for the next Fairphones this year. Therefore, we decided to take another direction that we had been researching for quite some time: fair trading initiatives existing in South America.

Before we go any further, let’s look at the different initiatives of conflict-free and fair trade. Conflict-free mining initiatives were initiated to prevent the mining and eventual sales of minerals from financing conflict in the DRC and its neighboring countries in the African Great Lakes Region. Fair trade certification schemes exist all over the world, including countries without armed conflict. The primary objective of the conflict-free initiatives is to break the link between minerals and armed groups in the African Great Lakes Region. At the same time, the primary objective of fair trade initiatives is to ensure that small scale traders receive a fair level of reimbursement for their products or commodities.

Besides offering more favorable trading conditions, fair trade producers must meet requirements concerning working conditions, wages, worker representation and environmental impact. Fair trade initiatives  are in that sense more advanced than the conflict-free mining initiatives. However, tracking and tracing minerals to ensure they do not contribute to conflict is often already a difficult first step in countries where mines operate in an informal economy and conflict prone environment. 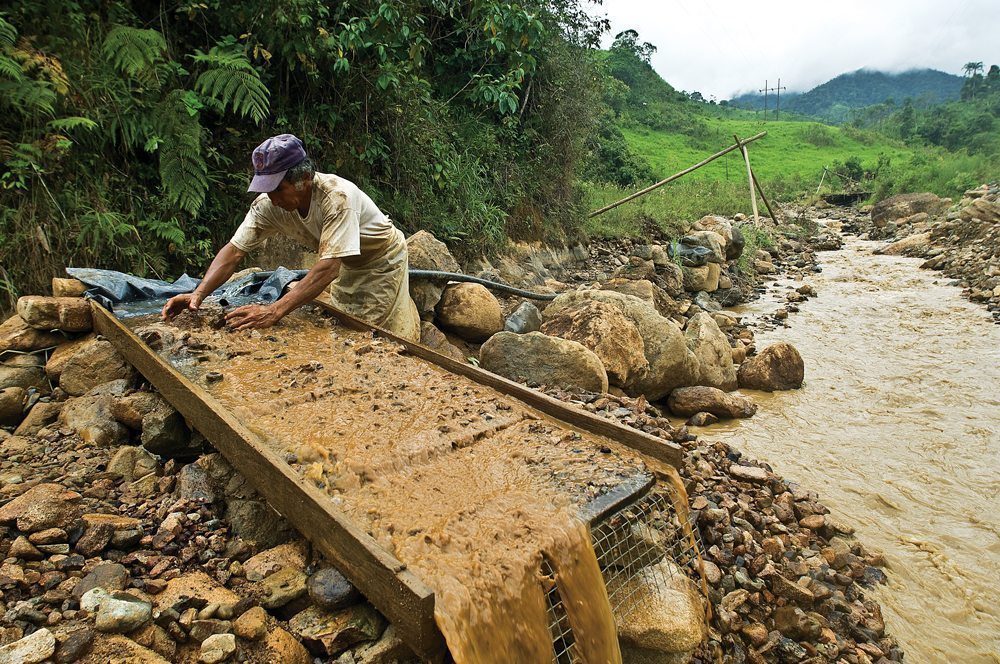 We knew that several existing initiatives for sourcing fairer gold are already being used in the jewelry sector. To explore our options for incorporating fairly traded gold into the electronics supply chain, over the past year, we started having close discussions with organizations like Fairtrade* International (using the Fairtrade labelling organization, FLO) and the Alliance for Responsible Mining (ARM), who helped us in our research providing us with new insights on how gold is mined, refined, and how it eventually makes its way to markets worldwide. Since there are currently no certified sources of fair trade gold in Africa we started looking at fair trade gold mines in South America, including Peru, Bolivia, and Colombia.

In the fair trade set up, small-scale producers and mine workers are offered favorable trading conditions which should provide them with a better price to invest in improving their business or in community projects such as education, clean water and health care.

How gold is integrated into the components of a phone

Once we confirmed that there was a possibility for fair trade gold from South America, we started discussing with gold refineries and electronic component manufacturers. If we managed to find a refinery that could refine the fairer gold, we would be one step closer to our goal of finding a supplier who would be willing to incorporate the gold into one of the components we are using in our next product. To do so, we starting researching how gold is used in electronic components.

Gold is applied to electronic components, for example the printed circuit boards (PCBs), through “electroplating,” in which the component is coated with gold using a gold bath.

More specifically, electroplating is the process of coating a metal object with a thin layer of another metal. Electroplating requires the use of a gold solution – a liquid that binds to copper elements to coat them in gold. Imagine a big bath containing some gold in which certain components, like a printed circuit board, are “dipped” to coat the copper connections with gold. 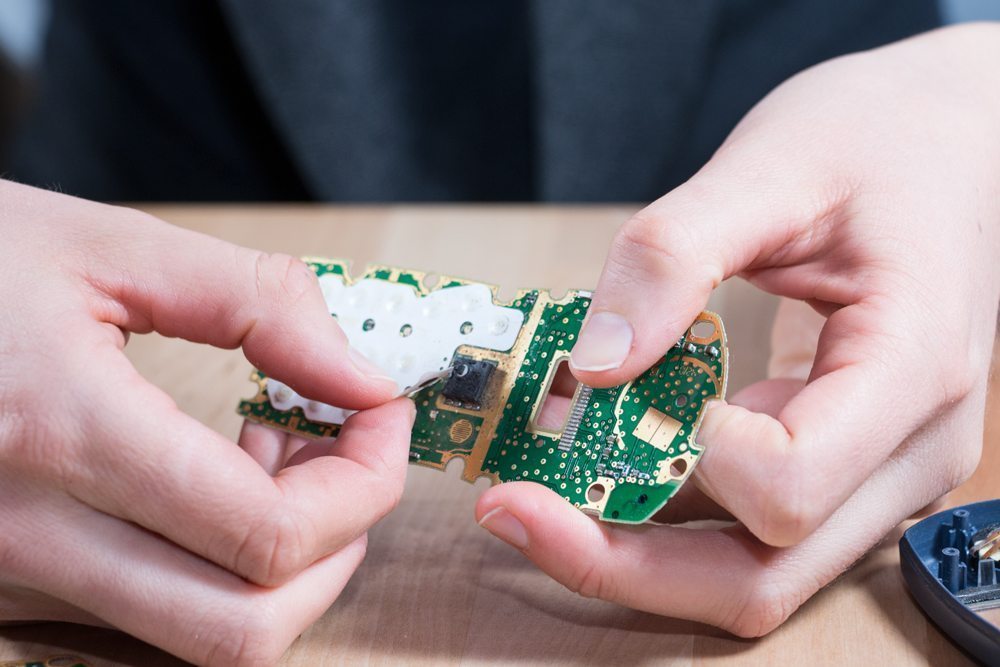 A printed circuit board (PCB) contains small amounts of gold

At a factory, this solution is not made in individual batches per component, but is continuously “refilled” as necessary. With gold from different sources continuously being mixed together, it is impossible to say that components are made from one source of fairly traded gold. The consequence would be that if we would be able to find a supplier who would be willing to incorporate fair trade gold, we would end up with what is referred to in the industry as Mass Balance. Given the relatively low quantities that Fairphone produces, the “mass balance” system is the most feasible first step for our next batch. The best case scenario for the near future would be that we are then able to say that our Fairphones “contain fair trade gold” or “support fair trade gold,” but we would not be certain that they don’t contain gold from other, non-traceable sources. But until now, this is a hypothetical situation, as we have not yet found a way to include the fair trade gold into this production process.

The gold route: All roads lead to Shanghai

One thing has become very clear: as almost all the components that contain gold are produced in China, the gold, one way or another, needs to go through China. After engaging further with a few suppliers, we learned that this would be a challenge as the gold trade is strictly regulated in China, making the import and tracing of the gold very complex.

All import and trade of gold in China must go through the Shanghai Gold Exchange, a carefully regulated marketplace for gold trading in China.

Manufacturers that use gold in production processes are audited by Chinese governmental agencies periodically and companies need to be accredited by the gold exchange to be eligible to import the gold. Auditors review the figures of gold input and output in products and production processes and verify whether the gold used was purchased through the gold exchange. This way, the country monitors and regulates the entire supply and demand in the Chinese gold market.

At the Shanghai Gold Exchange, gold is mixed up and intermingled, making it hard to trace it back to its source of origin. Therefore, the lack of traceability is a problem for us, as we will need to certify that our manufacturers use our fair trade gold imported through the exchange. Even the Security and Exchange Commission (SEC) has reported (page 3) that it was unable to trace the gold traded at the Shanghai Gold Exchange as there was no official documentation released regarding the exact origin of the gold.

Our journey to incorporate fair trade gold in the next Fairphone therefore currently reached an end at the Shanghai Gold Exchange (SGE). As we write, we are researching how the SGE functions and assessing the possibilities of tracing and importing fair trade gold through this institution.

We have a few months still until production, but at this point it is still uncertain that we will be able to integrate fair trade gold into the second generation Fairphone.

This is due to the fact that it seems almost impossible to import fair trade gold through the Shanghai Gold Exchange and subsequently be able to trace it through the SGE all the way up to the component manufacturer. We are positive, however, about this path as we are in talks with some driven and highly professional component manufacturers (which we will introduce at a later stage) who are putting their efforts into this cause.

In the meantime, we have started mapping the components in our next phone that include gold. The following months, we will be reaching out to the suppliers of these components to provide us with information on their sourcing of gold. This way, we hope to be able to have a breakdown of the routes of gold and trace back the mines of origin.

We will work step-by-step and aim to know at least all the gold smelters used, after which we hope to start digging deeper into the locations of the mine sites. We are only beginning to collect this information, and we will be updating our mining roadmap when we have more information to report.

We will keep pursuing our aim of achieving more transparency in the gold supply chain and will make sure to keep you updated. We want to thank the partners and consultants already who have given us a greater insight into the possibility of fair trade gold in our supply chain. We are strengthened by people’s support and their ambition to achieve getting this done. We welcome all feedback, contacts, and ideas as we continue in this endeavour.

*Fairtrade is the trademarked name of Fairtrade International (FLO) and associated with this Fairtrade labeling organization. The term fair trade is the general concept of the economic model of fair trade practices.